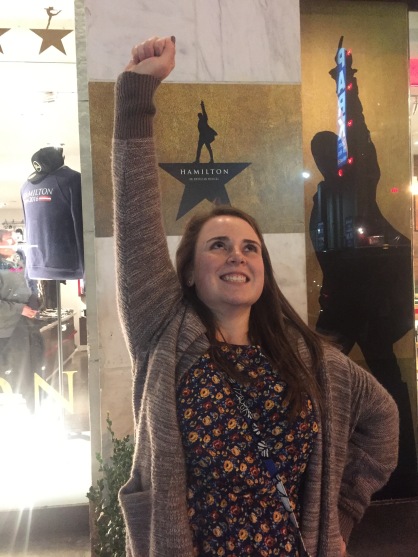 2017 continues to be another year of Hamilton for me! Last week, Ron Chernow gave a forum discussion at my school. Ron Chernow is the author of a Alexander Hamilton, aka the 800 page (!!!) biography that inspired Lin-Manuel Miranda to write his hit-musical about the founding father. I actually bought the book right after seeing Hamilton back in January, but I’ve only read a few sections that mainly focus on his relationship with Eliza. I’m really enjoying it so far  because the book reads more like a narrative than a history lesson.

Over 800 people came to the discussion, and it was so cool to see that many people interested in Hamilton in one space. Chernow began his talk by discussing some key points about Alexander’s life. As seen in the musical, he joked that Hamilton loved to talk, which helped him a lot as Washington’s right hand man and later Secretary of the Treasury. He also explained how Burr and Hamilton came to their famous duel. Despite what the show depicts, it wasn’t just the election of 1800 that caused them to duel (side note: the Drunk History episode does a fantastic job making this point as well and features Lin as our narrator!).

I had such an amazing night yesterday because Ron Chernow came and gave a talk at my school! If you do not know, Ron Chernow is the author of Alexander Hamilton, aka the book that inspired Lin Manuel-Miranda to write the musical that has taken over my life. It was so interesting to hear him talk about the process of turning the book into a musical with Lin. When he talked about Lin singing "Alexander Hamilton" to him for the first time, Ron Chernow sang the whole song himself on stage! I've only read a few sections of the book so far, have you read it???

Chernow soon transitioned to talking about Hamilton: An American Musical and how he became involved in the project. He admitted that he was a bit skeptical of Lin’s idea at first, but Lin’s passion and determination won him over. When he recalled the first time Lin sang “Alexander Hamilton” to him, Chernow sang the entire song on stage! It was so genuine and funny, I just couldn’t stop smiling! He also shared some behind the scenes information about the show.I knew that the characters’ type of singing had something to do with their age, for example, Jefferson sings jazz while the rest of the characters have moved on to rap. However  I never knew that the characters’ appearance above their neck was purposely modern-looking, while their outfits were inspired by eighteenth and nineteenth century wear.

Toward the end of the discussion, Chernow answered questions from the audience. Many of the history teachers in the crowd thanked Chernow for making history fun again. They said that Hamilton has  inspired to students to learn more about Alexander Hamilton’s time in history, as well as easily incorporating the musical into their lesson plans. My hands-down favorite questions came at the end by two children, who asked what Chernow’s  favorite song was (“Satisfied”) and if he would sign their books (yes). Overall, it was so exciting to have Ron Chernow at my school and hope to attend more Hamilton-esque events in the future.

Since February 2016, I’ve been absolutely obsessed with Hamilton. And when one is obsessed with this musical about Alexander Hamilton, one knows that there’s a 0.00000001% chance of ever being able to see it due to its high demand and extremely expensive tickets. That being said, you can imagine my shock when I found two tickets underneath my Christmas tree. My parents first played the tickets off as a joke gift, as they were wrapped in a bunch of The Children’s Place bags. I’m just five feet tall (or so they tell me) so I’m used to my height being the source of most ha-ha moments. What I thought would be a pair of kids’ pajamas turned into an envelope with two tickets to the room where it happens.

So on January 8th, 2017, my mom and I set off on our experience seeing Hamilton. Beforehand, my mom had never listened to the show besides listening to my constant renditions of “My Shot”. We went the day after a huge snowstorm and it was still really cold out. So naturally at the train station, I stepped into a huge pile of slush while getting out of the car, my feet freezing and my once-black boots taking on whatever what was in that pile. Once we got into the city, the weather and my feet warmed up, the latter thanks to a pair of fuzzy socks from Duane Reade.

Since we already had our tickets, my mom and I weren’t in a rush to get to the theatre, and we had a great lunch at The Pig N Whistle (next way to my heart: food from an Irish pub). We arrived at the Richard Rodgers Theatre around 2:30 and there were just people on people on people in line. Even with the crowds, we went into the theatre quickly and had time to splurge $60 on the classic Hamilton tee and mug.

While we sat in the second row of the rear mezzanine, I could see the stage with no problem. Before the show even started, I was completely mesmerized by the lights. The lights hit the stage so that it looked like there were “Alex”s spelt all over the stage. As soon as “Alexander Hamilton” started,  I began judging how this cast sounded compared to the album. Unfortunately, by the time I saw the show, the original cast had left for other projects (even though there was a small part of me that hoped that Lin would make an appearance).I quickly stopped because the singing and acting were amazing. Jordan Fisher played John Laurens and Philip Hamilton, and I was in love with the character he brought to each role . While Javier Muñoz, aka ‘Sexy Hamilton’ didn’t perform as the title character, Michael Luwoye bought a lot of emotion and humor to Hamilton himself.

Hands-down, my favorite part of the show was the humor. Between Laurens drunkenly slumping over Burr during “The Story of Tonight (Reprise)” to King George III stomping his foot for his spotlight to turn blue, I couldn’t stop laughing. My mom loved every scene that King George III was in, both of us agreeing that Rory O’Malley completely stole the show as the monarch. Overall, I couldn’t stop smiling throughout the entire show and I’m so lucky to have had this experience seeing Hamilton. I ordered the Alexander Hamilton biography, the book that inspired Lin-Manuel Miranda to write the show, right when I got home because I needed more! The author, Ron Chernow, is coming to my school in a week to give a talk about his book so my Hamilton experience will most definitely continue throughout 2017.