Summary (from the publisher): Sophie wants one thing for Christmas-a little freedom from her overprotective parents. So when they decide to spend Christmas in South Louisiana with her very pregnant older sister, Sophie is looking forward to some much needed private (read: make-out) time with her long-term boyfriend, Griffin. Except it turns out that Griffin wants a little freedom from their relationship. Cue devastation.

Heartbroken, Sophie flees to her grandparents’ house, where the rest of her boisterous extended family is gathered for the holiday. That’s when her nonna devises a (not so) brilliant plan: Over the next ten days, Sophie will be set up on ten different blind dates by different family members. Like her sweet cousin Sara, who sets her up with a hot guy at an exclusive underground party. Or her crazy aunt Patrice, who signs Sophie up for a lead role in a living nativity. With a boy who barely reaches her shoulder. And a screaming baby.

When Griffin turns up unexpectedly and begs for a second chance, Sophie feels more confused than ever. Because maybe, just maybe, she’s started to have feelings for someone else . . . Someone who is definitely not available.

This is going to be the worst Christmas break ever… or is it?

Ashley Elston’s 10 Blind Dates made my TBR radar earlier in 2019 thanks to its holidays-inspired premise. As many as you know, I love when books incorporate one of my non-bookish faves. And Christmas is definitely a favorite interest of mine. I am proud to admit though that I have been fully embracing fall and Halloween this year by decorating my dorm room and purposely buying a Halloween costume. But never fear, my Christmas decorations are at the ready. Anyway, I also wanted to read 10 Blind Dates because I wanted to read more of Ashley Elston’s work. Although I enjoyed it, I wasn’t a super fan of her This Is Our Story as much as I hoped to be given the hype. However, I was really excited to embrace her first true contemporary story.

10 Blind Dates follows Sophie’s holiday break at her grandparents’ house in the next town over, after deciding to stay home while her parents visit her very pregnant sister three hours away in South Louisiana. Sophie couldn’t wait to get some alone time with her long-time boyfriend, Griffin- until she’s overhears him talking at a party about breaking up with her. With a big family who wants nothing but happiness for Sophie, her cousins, grandparents, aunts and uncles set Sophie set her up on ten blind dates. 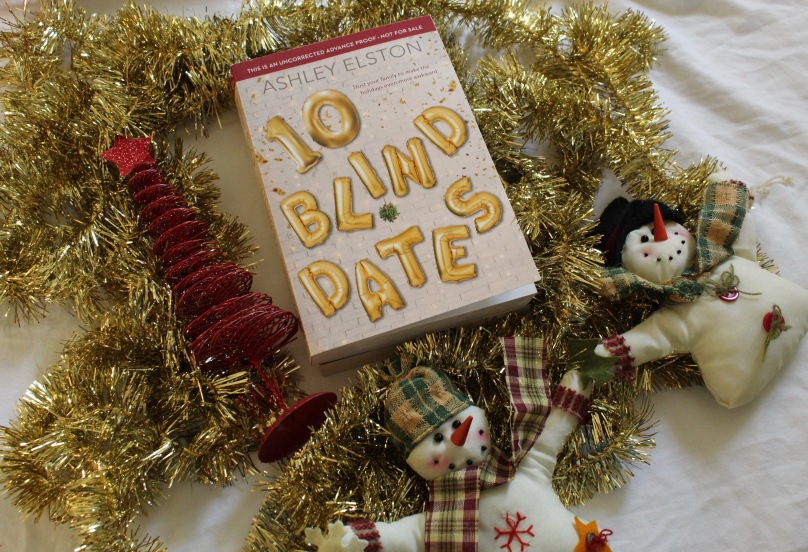 One of my favorite parts of 10 Blind Dates was of course Sophie’s crazy extended family. There are a lot of family members, but Ashley Elston does a really nice job of reminding readers who is who and focusing on the ones who are most central to the plot. Sophie’s Nonna was my favorite family member, creating the blind date idea and having homemade cannolis ready at the go. Living with her grandparents also allows Sophie to reconnect with her childhood best friends and cousins Charlie and Olivia (not to mention their best friend and neighbor, Wes).