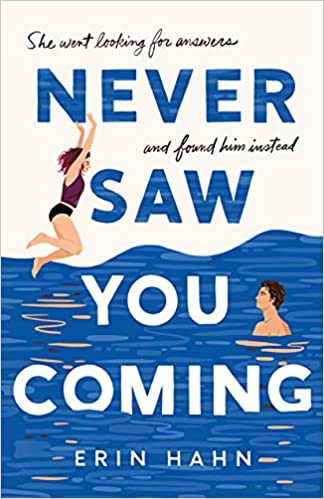 Summary (from the publisher):Raised by conservative parents, 18-year-old Meg Hennessey just found out her entire childhood was a lie. Instead of taking a gap year before college to find herself, she ends up traveling north to meet what’s left of the family she never knew existed.
While there, she meets Micah Allen, a former pastor’s kid whose dad ended up in prison, leaving Micah with his own complicated relationship about the church. The clock is ticking on Pastor Allen’s probation hearing and Micah, now 19, feels the pressure to forgive – even when he can’t possibly forget.
As Meg and Micah grow closer, they are confronted with the heavy flutterings of first love and all the complications it brings. Together, they must navigate the sometimes-painful process of cutting ties with childhood beliefs as they build toward something truer and straight from the heart.
In Erin Hahn’s Never Saw You Coming, sometimes it takes a leap of faith to find yourself.

I FINALLY picked up one of my most anticipated YA books of 2021 last week with Erin Hahn’s Never Saw You Coming — and yes, totally my fault for not picking this one up sooner since I ordered it around its September release. I’m a huge fan of Erin Hahn’s first two books, You’d Be Mine and More Than Maybe, so I couldn’t wait to get my hands on this YA novel following Vada’s best friend, Meg, (Vada is the female lead in More Than Maybe) who is reeling after finding out that her dad isn’t her biological father after all and decides to change her gap year plans by going to Northern Michigan to connect with her biological father’s family. While there, Meg connects with Micah, who is dealing with his own family struggles as his former pastor father has been in prison for the past few years.

Although Never Saw You Coming is in the same universe as You’d Be Mine and More Than Maybe, Never Saw You Coming is definitely a departure from Erin Hahn’s other two YA books, in the sense that faith is one of, if not THE, main theme. There are nods to Christianity and faith in her first two books, but Meg’s relationship to God and the church are large parts of the story. The book’s religious themes reminded me of Sonia Hartl’s Have a Little Faith in Me – definitely recommend picking up Never Saw You Coming if you enjoyed that book! By no means is Never Saw You Coming preachy or pushing faith on readers. The book is not so much about Meg and Micah doubting their faith, but more so about their relationship with the church and its problematic teachings. With her piercings and dyed hair, for example, Meg isn’t the church’s stereotypical youth group leader, and (with minimal spoilers) she eventually gets questioned for hanging out with Micah alone at night. Similar to how You’d Be Mine deals with darker themes, Never Saw You Coming deals with heavy themes, including but not limited to suicide, self-harm, and sexual abuse (Micah’s father was sent to prison for sexually abusing members of their church).

Meg and Micah’s individual character growth definitely takes center stage, but their relationship development was also well done and sweet. I’m not typically not a fan of the love at first sight trope – & I’ll be honest, wasn’t 100% sold on it in this book, I think I was more invested in them as individual characters than as a couple, but the two complimented each other well. I also thought it was kind’ve refreshing to see a couple who were clearly head over heels for one another, but didn’t rush into anything physical (this partially has to do with their faith). I also really enjoyed the focus on family, as Meg is trying to pick up the broken pieces of her mother’s secret and getting to know her great grandmother and uncle.

Overall, I really enjoyed Never Saw You Coming, as it feels very mature and different for its focus on faith and how it is explored through Micah & Meg. More Than Maybe does remain as my favorite Erin Hahn book, & I’m so excited to read her adult romance debut, Built to Last, this fall!

Have you read Never Saw You Coming? What did you think? What’s your favorite book by Erin Hahn? Share in the comments!