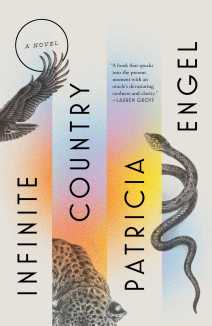 Summary (from the publisher): An urgent and lyrical novel about a Colombian family fractured by deportation, offering an intimate perspective on an experience that so many have endured—and are enduring right now.

At the dawn of the new millennium, Colombia is a country devastated by half a century of violence. Elena and Mauro are teenagers when they meet, their blooming love an antidote to the mounting uncertainty of life in Bogotá. Once their first daughter is born, and facing grim economic prospects, they set their sights on the United States.

They travel to Houston and send earnings back to Elena’s mother, all the while weighing whether to risk overstaying their tourist visas or to return to Bogotá. As their family expands, and they move again and again, their decision to ignore their exit dates plunges the young family into the precariousness of undocumented status, the threat of discovery menacing a life already strained. When Mauro is deported, Elena, now tasked with caring for their three small children, makes a difficult choice that will ease her burdens but splinter the family even further.

Award-winning, internationally acclaimed author Patricia Engel, herself the daughter of Colombian immigrants and a dual citizen, gives voice to Mauro and Elena, as well as their children, Karina, Nando, and Talia—each one navigating a divided existence, weighing their allegiance to the past, the future, to one another, and to themselves. Rich with Bogotá urban life, steeped in Andean myth, and tense with the daily reality for the undocumented in America, Infinite Country is the story of two countries and one mixed-status family—for whom every triumph is stitched with regret and every dream pursued bears the weight of a dream deferred.

Between its early praise and selection as a February Book of the Month pick, Infinite Country is rightfully going to be taking up a spot among so many readers’ spring reads. At less than two hundred pages, Infinite Country is definitely a read you can absolutely devour in one sitting. I ultimately read it over three sittings during a few busy days, but I still enjoyed eating it up in chunks.

Infinite Country follows a Colombian family over at least twenty years as all members attempt to immigrate to the United States. The plot is really complicated to simply summarize, but in the best way possible. The book alternates between couple Elena and Mauro’s relationship over the years, the birth of their children, and each member of their family’s present day. Without being too spoilery, my favorite perspectives were Elena and Mauro’s children. As the daughter still living in Colombia, Talia’s perspective set against her being on the run was very unique and provided a ton of commentary on what it is left to be separated from family as a result of immigration. It was also really interesting, yet incredibly hard to read about Elena (warnings for sexual assault). Elena is left in the United States to raise her two older children, Karina and Nando. Karina and Nando’s own experiences as the children of immigrants in the US was also super telling and somber.  She is constantly trying to find steady work and housing for the family, while also thinking about her family back home.

The story is really about how one family can be divided because of immigration, regardless of context or setting. Nevertheless, it was even more thought-provoking since it is set between the late 1980s/90s and our present day. The Columbian setting provides a different political context that readers might be unfamiliar with (including myself), including Columbian culture and spiritual & political life. I do think some of the political conflicts within the country that Mauro and Elena experience especially as teenagers pulled me out of the story sometimes, feeling like I needed a bit of a history mini lesson on present day Colombia. Mauro’s past and his connection to spirituality was hard to follow at times, but I was really invested in his immigration story and present day.

Overall, I can easily see Infinite Country among the best books of 2021. Through Patricia Engel’s artful story-telling, this family’s story is incredibly timely and will resonate with literary fiction and YA fans alike.

This review is based on a review copy provided by the publisher. By no means did receiving this book affect my thoughts & opinions.

Is Infinite Country on your TBR? Have you read Patrica Engel’s work? Share in the comments!