I’ve been reading so much this summer, and mini reviews have been my new favorite way to share my thoughts on my recent reads. Today’s mini reviews are books that I would describe as mixes between women’s fiction and literary fiction, which include: Kiley Reid’s Such a Fun Age, Emma Straub’s All Adults Here, and Jennifer Weiner’s Big Summer.

Such a Fun Age by Kiley Reid

Such a Fun Age by Kiley Reid had been on my TBR since December. So many of my friends have been reading this one since its January debut, but it recently made it way back on to my bookish social media feed between the controversy surrounding The Reading Rush (in short, it was their book club choice and the hosts did not finish reading the book in time for their live show) and that it is a 2020 Booker Prize Longlist Nominee. The book follows the events after an African American babysitter, Emira, is accused by a shopper and security guard at a grocery store for kidnapping the white child she babysits for. Emira develops a romantic relationship with a white man that recorded the altercation, Kelley, while Emira’s boss and blogger, Alix, tries to best handle the situation and develop a relationship with Emira.

Such a Fun Age is a very complicated and multilayered read, alternating between Emira and Alix’s third person perspectives. This book really makes the reader think about the characters and their motivations, especially when it comes to Alix. I didn’t mind the writing style, but it didn’t necessarily grab me. It was easy to read, but again, it leaves the reader thinking about both main characters’ thoughts and actions. In short, Alix is someone who is so out of touch with reality and is ultimately really selfish. She doesn’t understand Emira’s experience and her own husband has recently made some controversial comments on his news cast that ultimately leads to Emira being accosted by the security guard. I will say that I wish there was more development surrounding Alix, especially her past with Kelley, but I think Kiley Reid leaves Alix’s ending unopened in the sense that the reader hopes or assumes that Alix will think more deeply about her actions.

My favorite element of Such a Fun Age was Emira’s relationship with Briar. Emira cares so, so much about Briar, and one of the novel’s main ideas is that Emira sees Briar differently than Alix sees her own daughter. Briar is a very observant three-year old and makes some observations that don’t necessarily make sense to Alix, but Emira does her best to make Briar feel loved and maintain her confidence. My heart broke for their relationship.

Overall, I enjoyed Such a Fun Age for its very relevant and timely story. It’s definitely not a book that spells everything out and some characters’ motivations are definitely questionable, but it leaves readers thinking. I think it’s such a great book to discuss with friends or for a book club!

All Adults Here by Emma Straub

Emma Straub’s latest release, All Adults Here, is one of my favorite binge-reads of the 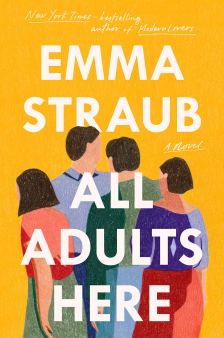 summer. I had started this one late on a Friday night, devoured 100 more pages on the beach Saturday, and then spent the rest of Saturday night reading and finishing it before going to bed. Emma Straub’s books seem to get mixed reviews on Goodreads, but I absolutely love her writing style and storytelling. Her books tend to have quirky storylines and complicated families, and focus on family dynamics and the uncovering of the past and secrets. It’s honestly really hard to describe the synopsis of her books sometimes, but they’re just so character driven it honestly doesn’t matter. All Adults Here follows family matriarch, Astrid, her three grown up children, her granddaughter, and a few other side characters mixed in. When Astrid witnesses a school bus incident, it brings her back to some memories of her early parenting days, and realizes it’s time to clue her children in on her dating life. Astrid’s two sons are each struggling to balance parenting with everything else – Nicky’s daughter Cecelia is actually on her way to spend the school year with Astrid after a bullying incident- , while Porter is preparing to become a single parent for the first time.

All Adults Here is really all about growing up, parenting, and dealing with the past. It definitely reads as a more light-hearted story, while dealing with complicated or modern issues. It also has really diverse LGBTQ representation.  Porter and Cecelia were my favorite perspectives. Astrid is an interesting cross of conservatism and open-mindedness, and it took a lot for her to understand why Porter wanted to raise a child on her own. While there is some romance and relationship development, this book has such a huge emphasis on family as each member tries to understand each other and how they’ve changed over the years as a result of their father’s death, marriages, relationships, kids, work, and life in general. I highly recommend checking this one out if you love family-driven stories.

up forever. After seeing her latest release, Big Summer, on so many people’s anticipated summer releases lists and reading a few good early reviews, I decided to pick it up. I’ll admit that I didn’t read much beyond the ‘plus sized influencer gets invited to her former best friend’s wedding’ synopsis… and I sort’ve wish I did because the plot and mystery just did not engage me.

Big Summer had a really strong start. The book had really captured my TBR’s attention because I loved the influencer part and let’s face it, I’ll read almost any book with a wedding in it. I loved reading about Daphne’s life in New York City working as a nanny and Instagram influencer. There’s a ton of discussion surrounding Daphne being plus sized, as well as her weird friendship with her former high school best friend, Drue. After Drue insults Daphne for her weight back in college, the two had separated. But with Drue needing some more celebrity power for her hundreds of thousands of dollars wedding (and maybe wanting to make up her relationship with Daphne?), Daphne agrees to serve as a bridesmaid. The writing style and storytelling was very reminiscent of Sophie Kinsella’s books. However, I began losing interest in the story even before the big mystery begins – apologies if this sounds really vague,  but I don’t want to be too spoilery! I don’t mind a good mystery or thriller, but I found Big Summer’s mystery really uninteresting and didn’t find myself getting invested in the ‘who-dunnit’-ness of it all. I had no sympathy for Drue whatsoever and really wasn’t that invested in Daphne’s storyline. I will try another of Jennifer Weiner’s books, but Big Summer was just a miss for me.

Have you read any of the books that I mentioned? Do you have any recommendations for me based on them? Share in the comments!