When Solène Marchand, the thirty-nine-year-old owner of a prestigious art gallery

in Los Angeles, takes her daughter, Isabelle, to meet her favorite boy band, she does so reluctantly and at her ex-husband’s request. The last thing she expects is to make a connection with one of the members of the world-famous August Moon. But Hayes Campbell is clever, winning, confident, and posh, and the attraction is immediate. That he is all of twenty years old further complicates things.

What begins as a series of clandestine trysts quickly evolves into a passionate relationship. It is a journey that spans continents as Solène and Hayes navigate each other’s disparate worlds: from stadium tours to international art fairs to secluded hideaways. And for Solène, it is as much a reclaiming of self, as it is a rediscovery of happiness and love. When their romance becomes a viral sensation, and both she and her daughter become the target of rabid fans and an insatiable media, Solène must face how her new status has impacted not only her life, but the lives of those closest to her.

I feel like The Idea of You is one of those under-the-radar books that although you don’t see it too often, once you come across someone who has read it, they have nothing but LOVE for it! I first heard about The Idea of You through Bad on Paper. I think in an episode in the beginning of quarantine, they had recommended it as a great binge-read to take your mind off real life for a while. The book was also one of their book club picks in 2019, and it always seems to be their go-to book hangover cure/’need something to read’ recommendation.

The best way to describe The Idea of You? Forty-year old mother, Solène, takes her teenage daughter to a boy band concert (alla One Direction), where during a meet and greet, she meets and then begins secretly dating the band’s twenty-year old heartthrob, Hayes. Robinne Lee confirmed in her interview with Bad on Paper that the book was definitely a bit inspired from One Direction, as well as other famous male singers like Ed Sheeran. I may have or may not have told one of my book-loving, One Direction, Harry Styles fan of a best friend to immediately pick The Idea of You up. 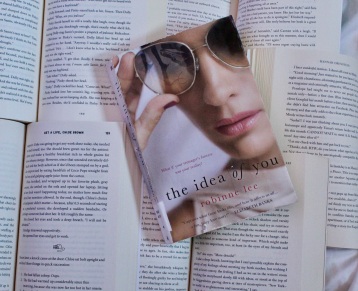 The Idea of You was such a refreshing and unique, aka scandalous, contemporary romance read! There was such a fantastic balance between Solène and Hayes’ relationship and all the drama that came with it. Basically, every central conflict is caused by the age difference between the pair and how that age difference, not to mention that Hayes is the most famous boy band member on the planet, affects a lot going on in Solène’s life. How can she possibly explain to her thirteen year old daughter that she’s in love with her favorite celebrity crush, not to mention one that is half her age?

I feel like Solène and Hayes’ age difference and its conflict was not so much about the age difference itself (although people and Hayes’ fans definitely have a lot to say about it), but more so about Solène having a teenage daughter who is in love with Hayes’ band, August Moon. It was really hard for me as a reader to figure out who I felt more sympathy for, Isabelle or Solène.

I’d say that the first half of The Idea of You is all about Hayes and Solène getting to know each other before their relationship is thrown into the spotlight.Although Solène experiences a lot of inner turmoil, I liked that the reveal of their relationship and its after-effects don’t take up the entire book. There’s also plenty of steammmmm, to say the least, between Hayes and Solène from the beginning of their relationship to the book’s very end.  While yes, Solène does worry throughout if her relationship with Hayes will actually work, there’s no denying that there is chemistry between the two. Between having STEAMY romance scenes throughout, the age scandal, the setting, and the ending that has left many readers in tears, Robinne Lee definitely broke the formulas I expect in my romance books. I think she really nailed it all! I also just want to add that I DID enjoy the ending and thought that it felt very true and realistic (yes, I realize that this book’s premise is unrealistic) to what Solène was feeling.

Readers definitely have to suspend some disbelief when going into this one, as Solène -who does seem to have a lot of money from her work as an art gallery owner- basically jets off all around the world to wherever Hayes is and doesn’t get caught for quite a while. I really loved the glamour. I was fun to see Robinne Lee’s take on the world of boy bands and fame. The story really just made for a really fun and addicting adventure. I managed to read The Idea of You in under two days because I seriously could not put it down, especially once Solène and Hayes’ relationship is aired to the world.

Overall, The Idea of You lived up to the hype. Robinne Lee perfectly executed all of the book’s elements, from Solène and her daughter’s relationship, her relationship with Hayes, the fandom, the glamour, the chemistry, the setting, all of it! I really did like the way it ended … but I wouldn’t mind a sequel or at least another book by Robinne Lee. If you’re looking for something unique in the world of romance reads this summer, I recommend checking The Idea of You out.

Have you read The Idea of You? Would you want a sequel? What romance books have you been reading lately? Share in the comments!

One thought on “MUST-READ LOVE STORY: The Idea of You Review”