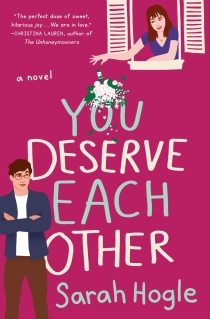 Naomi Westfield has the perfect fiancé: Nicholas Rose holds doors open for her, remembers her restaurant orders, and comes from the kind of upstanding society family any bride would love to be a part of. They never fight. They’re preparing for their lavish wedding that’s three months away. And she is miserably and utterly sick of him.

Naomi wants out, but there’s a catch: whoever ends the engagement will have to foot the nonrefundable wedding bill. When Naomi discovers that Nicholas, too, has been feigning contentment, the two of them go head-to-head in a battle of pranks, sabotage, and all-out emotional warfare.

But with the countdown looming to the wedding that may or may not come to pass, Naomi finds her resolve slipping. Because now that they have nothing to lose, they’re finally being themselves–and having fun with the last person they expect: each other.

Sarah Hogle’s You Deserve Each Other is the funniest contemporary romance novel that I’ve ever read.

This debut novel follows fiancés Naomi Westfield and Nicholas Rose, who are anything but ready for marriage. For the past year, Naomi has began to doubt her future with Nicholas, but with so many deposits already placed (including the wedding dress her not-so great mother-in-law basically chose), Naomi knows the only way out of her engagement is to make Nicholas break off the engagement. With plenty of sabotage and pranks in store, Naomi and Nick test each other to see who can break first.. and suddenly start having the most fun they’ve had in their relationship in a while. 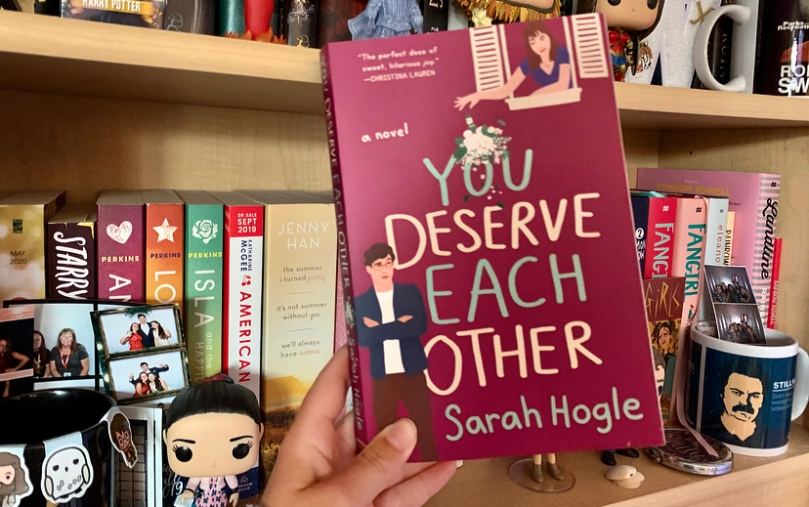 You Deserve Each Other captured my attention for its unique take on the enemies-to-lovers trope, or really, the lovers-turned-enemies-turned-lovers-again trope! I feel like workplace romances are the most common place for the trope – don’t get me wrong, I LOVE them- but it felt so refreshing to have this trope in a setting unlike anything other I’ve read! Naomi and Nicholas are both pretty miserable, but Naomi is truly the mastermind in their break-off plans. Nicholas is ready to play the game as well, but readers soon discover that Nicholas’ true motive isn’t about sabotaging his relationship.

I loved those early moments in between the conflict and pranks where Naomi and Nicholas connected. My hope for them as a couple really soared after the chapter in which Naomi takes care of Nicholas when he’s sick. She goes beyond what both the reader and Nicholas imagined.

I genuinely loved Naomi as a protagonist, her love of food scented candles and reality TV included. She felt unconventional, or at least wasn’t the perfect dream girl. She didn’t go to college, doesn’t have a great job or career, and just feels really lost. Her personality and humor won me over from the get-go. I copied down the passage in the first chapter where she describes her love for autumn and pumpkin candles. I don’t want to include too many spoilers, but her descriptions of Nicholas’ surprise was just so atmospheric, while showing that maybe her future wasn’t Nicholas-free.

Plenty of contemporary romances or even contemporary romantic-comedies have their funny moments, but You Deserve Each Other is the best well-done rom-com I’ve ever read. Naomi is so well-equipped with one-liners, from dinners with the in-laws, to her battles with Nicholas, to her inner monologues. It wasn’t exactly jump-off-the-page funny or *insert laugh track here* comedy, but Sarah Hogle interweaves such smart wit and sarcasm throughout the story. The premise of the story surrounds Naomi and Nicholas’s supposed lack of chemistry, but their true chemistry makes for such funny dialogue – even when the joke is at the other’s expense.

In the very first chapter, I literally laughed out loud when Naomi imagines a Bachelor star interrupting her wedding ceremony. I don’t want to be too spoilery, but some of my favorite scenes include the first dinner with the Roses, the fight over her cell phone with Nicholas, and when Naomi and Nicholas are hiding out from some unwelcome visitors near the end of the book.

Overall, You Deserve Each Other by Sarah Hogle is a must-read contemporary romance. It is seriously the funniest rom-com I’ve ever read, with such a unique take on the enemies-to-lovers trope. I cannot wait to see what Sarah Hogle may have next!

Have you read You Deserve Each Other? What are some of your favorite contemporary rom-coms? Share in the comments!

9 thoughts on “FUNNIEST ROM-COM: You Deserve Each Other Review”