Summary (from the author): 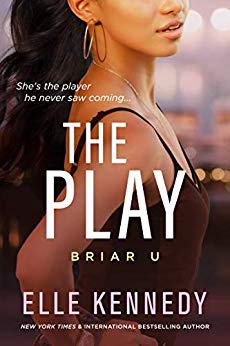 What I learned after last year’s distractions cost my hockey team our entire season? No more screwing up. No more screwing, period. As the new team captain, I need a new philosophy: hockey and school now, women later. Which means that I, Hunter Davenport, am officially going celibate…no matter how hard that makes things.

But there’s nothing in the rulebook that says I can’t be friends with a woman. And I won’t lie—my new classmate Demi Davis is one cool chick. Her smart mouth is hot as hell, and so is the rest of her, but the fact that she’s got a boyfriend eliminates the temptation to touch her.

Except three months into our friendship, Demi is single and looking for a rebound.

And she’s making a play for me.

Avoiding her is impossible. We’re paired up on a yearlong school project, but I’m confident I can resist her. We’d never work, anyway. Our backgrounds are too different, our goals aren’t aligned, and her parents hate my guts.

Hooking up is a very bad idea. Now I just have to convince my body—and my heart.

Elle Kennedy is my favorite new adult romance author. Her Off-Campus series stole my heart last summer, so I knew I needed to kick off my June with one of her Briar U books, The Play. Briar U is the spin-off series to Off-Campus. Both series follow romances between the women of the fictional Ivy League school, Briar University, and the college’s hockey players. The Play follows Hunter, who we’ve seen in both series, and a new female lead, Demi. As the newest hockey team captain and after years of being a playboy, Hunter decides to take himself out of the dating world in order to focus on his team. Hunter isn’t expecting anything from his psychology project partner, Demi, until a nasty break-up makes Hunter and Demi closer than they ever expected.

The Play was everything I look for in my Elle Kennedy books: charming male leads, college life (partying included), hockey, romance, and smart,sarcastic female leads. I’ll admit that Hunter was never really my favorite male lead, especially after The Chase, but he really grew on me in this book. Having his perspective brought out a new side of him. There’s a little bit of talk about his  feelings for Summer, but his romantic focus in this book was really combatting his feelings for Demi while trying to stick with the commitment he made to himself. Demi and Hunter have such great chemistry from the very beginning, and while they had always been flirty with one another, it was fun seeing them move from friends into something more. 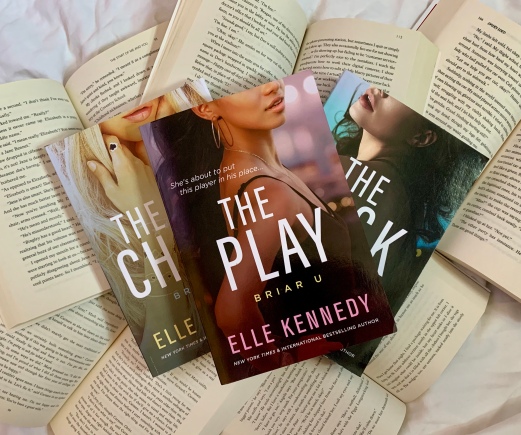 I don’t think Demi was my favorite Briar U/Off-Campus protagonist, but she grew on me. I believe Demi is the most diverse protagonist in all of the series, having a black father and Cuban mother, but there’s been a lot of discussion in reviews about the authenticity (or lack thereof) of her representation and a few stereotypes associated with her. While I did enjoy Demi’s intelligence and strength, I do agree with reviewers that her representation did need some further development.

Every book after The Deal (Off-Campus #1) includes cameos and continues to have the same main cast as the other books, with The Play as no exception. Maybe it’s because it’s been a few months since I’ve been in the Briar U world – I read book #2 The Risk back in January – but I felt like The Play had many cameos from both series. I’ll admit that I do favor Off-Campus over Briar U, so I loved seeing Garrett & Hannah and Dean & Allie (even though I need my man Tucker!). Having all these characters in the books while introducing some new relationships and characters allows for the continuation and expansion of stories & storylines.

Some reasons that prevented me from giving The Play a full 5 out of 5 stars includes Demi’s father’s reaction to her relationship with Nico. I think its purpose was to show how Demi was breaking away from her parents’ wishes when it came to relationships and school/her career, but it was so frustrating. I also did not like the direction of the ending between TJ and Demi. It felt completely out of left field, and thinking about Demi’s conversations with TJ, I did not see the signs and it didn’t ultimately make sense at the end. I appreciated Elle Kennedy’s acknowledgement at the end of the book, but I think ultimately there could’ve been another way to prove Demi’s counseling skills and more importantly, resolve her relationship with TJ.

Although The Risk so far remains as my favorite Briar U book, I still really enjoyed The Play and thought it was a fun installment. I definitely recommend grabbing this one while sitting in the sun this summer. The Play immediately made me go order the latest installment in the Briar U world, The Dare. I can’t wait to see what Elle Kennedy does next, whether that’s staying in the Off-Campus/Briar U world or treating us to a new adult romance world.