You probably know that diving into YA dystopian/series about rich teenagers has been part of my 2020 reading game. If you’re in need of a read to distract you from reality (although I do not want to ignore the fact that this is such an important time for us to be educating ourselves & diversifying our reading), I can’t help but recommend Katharine McGee’s The Thousandth Floor trilogy. Since I’ve already reviewed the first book, today I’ll be sharing my mini reviews for the final two books in the series, The Dazzling Heights and The Towering Sky. 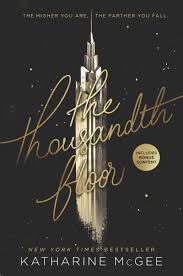 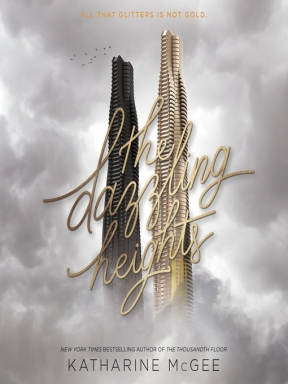 About The Thousandth Floor: 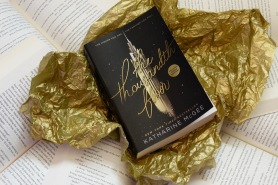 A hundred years in the future, New York is a city of innovation and dreams. But people never change: everyone here wants something…and everyone has something to lose.

Rylin Myers’s job on one of the highest floors sweeps her into a world—and a romance—she never imagined…but will her new life cost Rylin her old one?

Watt Bakradi is a tech genius with a secret: he knows everything about everyone. But when he’s hired to spy by an upper-floor girl, he finds himself caught up in a complicated web of lies.

And living above everyone else on the thousandth floor is Avery Fuller, the girl genetically designed to be perfect. The girl who seems to have it all—yet is tormented by the one thing she can never have.

The Dazzling Heights (The Thousandth Floor #2)

I enjoyed The Dazzling Heights more than The Thousandth Floor! While there is still some world-building and new high tech elements incorporated, I felt like I was already settled in the world. These characters and their drama is still absolutely ridiculous, but in the best way possible! I loved the direction of Leda and Watt’s relationship, and I thought Leda was a little bit more enjoyable of a character in this book.  No worries though, Avery still annoyed everything in me because of her relationship with Atlas. Sorry but even this installment couldn’t convince me of their forbidden romance. Rylin finds herself way more immersed in the world of Avery & Leda than she could have ever imagined, but her storyline wasn’t as directly involved in the four other main characters as the first one. Calliope was my favorite character in The Dazzling Heights, purely because of her extravagance and learning more about her life as a con artist. All of these characters have a lot to lose in book #3, but Calliope’s future makes me the most nervous, but intrigued to learn about.

The Dazzling Heights is filled with more minor plot happenings and much more build-up than the first book, but I was really okay with that because it I enjoyed that build-up and getting to know more about the characters (think lots of flashbacks and dialogue). The ending was a little ‘meh’ compared to The Thousandth Floor. There’s still a mystery at the end, but it’s not as earth-shattering as book’s #1’s ending. The Dazzling Heights has a lot of fluff and relationship development, but as you can probably tell, I entirely enjoyed it!

The Towering Sky (The Thousandth Floor #3)

Although the first two books also save the action for the end, The Towering Sky has the most amount of fluff in the entire trilogy. Again, I didn’t really mind it. I read this installment over a few days instead of in a sitting or two (blame it on grad school and finally being able to unpack my dorm room), but whenever I went to pick it up again, I had trouble recalling if any big events had happened during my last reading session.

The Towering Sky picks up a few weeks after The Dazzling Heights. The main cast are almost all in dramatically different places than where we left them in book 2. Rylin and Calliope don’t really have much to do with the murder mystery. While they still have secrets at risk (Rylin witnessing book #1’s murder and  Calliope’s con artist history), they don’t really have much else to do with Avery, Leda, and Watt’s dilemma. Rylin’s storyline revolved basically around Cord and Hiral. I think Calliope was still my favorite perspective because I find her story so interesting. In The Towering Sky, Calliope’s life takes on a much less glamorous turn, but there is love on the horizon. I also need to get to a chocolate shop that gives me my dream chocolate based on my taste preference. Calliope’s ending was also my favorite because I think it wrapped up her storyline nicely and had a promising future for her.

Avery was never my favorite character in the series, but is it bad to admit that I didn’t really care about her ultimate fate? I would’ve been fine with her running off to Oxford with her new beau and calling it happily ever after with him. Yes, three books in, I am still not an Atlas and Avery shipper! I definitely got behind Leda and Watt’s relationship in this one, although we actually don’t see them that much together. Like Calliope, we leave them both in good spots and things are looking up for them. I did predict Avery’s ultimate ending, but I would’ve never seen who was the book #2 murder coming.

Even though it didn’t leave me on the edge of my seat, The Towering Sky still had me invested in the world of The Thousandth Floor. While it wrapped up this world pretty neatly, I could see Katharine McGee writing more books in this world- and I’d be the first one to sign up for them!

Have you read The Thousandth Floor series? What are your thoughts? Do you have any YA series recommendations for me? Share in the comments!

One thought on “FINISHING THE THOUSANDTH FLOOR: The Dazzling Heights & The Towering Sky Review”