As per usual, my April reading was filled with contemporary books, but I did manage to squeeze in a thriller. Today I’ll be sharing my thought on a YA contemporary, a way-more-popular-than-I-thought thriller, and a recent contemporary romance. 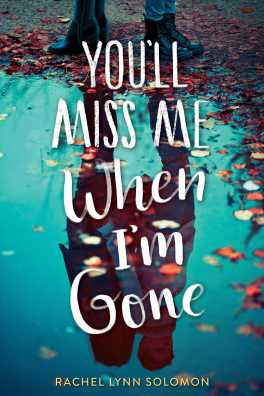 Rachel Lynn Solomon’s You’ll Miss Me When I’m Gone had been on my TBR for what feels like forever. Between my excitement for her upcoming release, Today Tonight Tomorrow, and my need to buy all the contemporary books, I decided to finally pick up a copy! You’ll Miss Me When I’m Gone follows twin sisters, Tovah and Adina, who are not the best terms in the slightest bit. Having completely different personalities and passions (viola for Adina, science for Tovah), the two decide to take a genetic test to see if they test positive for Huntington’s Disease, which has wrecked their mother’s health over their high school careers. While one twin tests negative, the other tests positive.

I enjoyed You’ll Miss Me When I’m Gone for its plot and focus on family and growth. I also enjoyed Rachel Lynn Solomon’s writing style and see myself diving into the rest of her books! This book is truly a growing up story, as Tovah and Adina are forced to reanalyze their plans for college and the future in light of what they learn from the test. I haven’t read a book before that featured a character with Huntington’s Disease, and I felt like I learned a lot. The book had really great and in-depth Jewish representation. Adina and Tovah’s family are conservative Jewish. While Tovah embraces her faith and traditions, Adina struggles to do so in light of all the hardship her and her family has experienced over the years.

I’ve become quite used to dual or two perspective books, but You’ll Miss Me When I’m Gone is definitely a book where I favored one protagonist over the other. In this case, I loved Tovah, but couldn’t stand Adina. She was so extremely cruel to Tovah and just unlikeable. I know this is part of her character arc, but her actions towards Tovah were so uncalled for. I also wasn’t a fan of her relationship with Arjun from the get-go. I did like the girls’ parents, but I think it was a tad unrealistic that they didn’t step in sooner and it frustrated me that they didn’t defend Tovah sooner.

Behind Closed Doors by B.A. Paris

Behind Closed Doors is my sister’s favorite book. Since she isn’t a big reader, whenever she says that she loves a book, I have to read it to see what’s grabbed her attention.  I finally decided to read it during one particularly stressful stay-at-home week during which all I wanted was a book I could just get sucked into and not have to think too much about anything else. I didn’t realize how popular this thriller was until I checked out its Goodreads page. I’ve come to realize that my sister has a thing for thrillers, aka books where people are trapped in their houses and/or lives.

Behind Closed Doors follows a married couple, Jack and Grace, who appear to be the perfect pair to all of their family and friends, but are hiding some dark secrets. I think Behind Closed Doors is almost everything what you would expect about a psychological thriller about a married couple. Even writing this review a few days after I finished reading it, I’m still not sure how I feel. On the one hand, I wasn’t blown away by the author’s writing style and found some plot elements to be quite predictable (and slightly ridiculous). I know he was probably supposed to, but Jack irked me so much. I found some of the dialogue between him and the other characters to be so cheesy (how could someone NOT be able to tell that something strange was going on?).

On the other hand, I couldn’t put this book down and blew through it in less than two days. I don’t think the ending was necessarily jaw-droopingly shocking, but I did think it was very clever and loved the last line. I do think Behind Closed Doors is a great read for a day at the beach or rainy day if you’re looking for a book that will force you to finish in one sitting.

Not the Girl You Marry by Andie J. Christopher

I plan on dedicating some of my reading this year to catching up on ALL the contemporary romance, which included Andie J. Christopher’s debut, Not the Girl You Marry. I had seen mixed reviews going into, but I was really drawn by the slight workplace-esque synopsis and wanted to give it a shot. Set in Chicago, Not the Girl You Marry follows Hannah, an event planner who is trying to score a big promotion, and Jack, a journalist who is trying to prove to his boss that he can do more than create funny how-to videos. The solution? Fake date each other so Hannah can prove that she is serious about relationships (and wedding planning) and so Jack can create a how-to-lose-a-girl piece AND undercover a political scandal. The problem? Hannah and Jack don’t tell each other that they’re using each other for work.

Not the Girl You Marry is one of the most rom-com-y of rom-com reads I’ve read this year. It definitely fulfills its comparison to How to Lose a Guy in 10 Days. While very sweet, I thought the last scene had the funniest moment! It took me a few chapters to settle into Not the Girl You Marry. While readers get Jack’s backstory almost from the get-go, Hannah’s backstory and relationship with her previous ex, Noah, is unraveled as the story goes on. I got more into the story as Hannah and Jack’s chemistry grew. The romance scenes were really good and had the perfect mix of relationship development and humor. Additionally, there’s a lot of interaction with the book’s secondary characters, like Hannah’s best friend/roommate, Sasha, and Jack’s friends and family. One element I didn’t expect going in was the Catholic representation (basically everyone in Hannah and Jack’s lives is Catholic) and I thought it was done nicely. Overall, Not the Girl You Marry was a perfectly fluffy read with its fake-dating tropes. I can see myself picking up the newly released companion novel, Not That Kind of Guy.

Have you read any of these books? What did you read in April? Share in the comments!