Middle Grade is a genre I’ve really tried to read more of over the past few reads. I find that many bloggers who read YA books tend to read middle grade and I’ve wanted to see what all the hype was about. I admit that I do struggle with the genre at times- there has to be something about the book’s synopsis that really grabs my attention. One recent release that definitely did is Alane Adams’ The Eye of Zeus. The first book in the Legends of Olympus series, The Eye of Zeus follows twelve-year Phoebe, who’s just found out she’s the daughter of Zeus and must travel back to ancient Greece to save someone very important to her. The Eye of Zeus speaks to the Percy Jackson fan in all of us, but I especially love how it features a female protagonist. I haven’t seen too many books about characters in foster care, like Phoebe. I also really admire Alane Adams, as an author, professor, and literary advocate! Her Rise Up Foundation helps children and teachers in need through book donations, classroom support, and grand-making.

In honor of The Eye of Zeus, today I’m going to be talking about my most memorable middle grade reads over the past few years.

Small Spaces by Katharine Arden (Small Spaces #1) – As a fan of Small Spaces and her adult fantasy series, Winternight, I am firm believer that Katharine Arden writes so incredibly across genres. Her writing is the definition of atmospheric. Small Spaces is a four book series set in Vermont and follows twelve-year old Ollie’s spooky adventures with her best friends. Small Spaces takes place on Ollie’s class field trip to a local farm whose haunting history comes to life. This book is the absolute perfect Halloween read, and I thought it was such a fun mystery. I unfortunately didn’t enjoy the second book in the series, Dead Voices. I loved the setting, taking place at a ski resort during a blizzard, and the conversations between Ollie and her dad about loss in their lives, but I was not a fan of the plot.

The Baby-Sitters Club by Ann M. Martin – I’m cheating a tiny bit with this one because I haven’t read it in a while, but the soon-to-be Netflix adaptation has me too excited! The Baby-Sitters Club is my all-time favorite middle grade series. When I was in elementary school, a trip to the library wasn’t complete without picking up at least one TBS book. I also read some of the graphic novel adaptations by Raina Telgemeier.

Percy Jackson and the Olympians by Rick Riordan – I think Percy Jackson is the first series that comes to most readers’ mind when they think of middle grade. I really wish I had read Percy Jackson when I was in elementary school or middle school, but I still enjoyed it as a high schooler. One of my best friends had sworn by anything and everything Rick Riordan writes, so I had to give the series a chance. I currently don’t have any interest in The Heroes of Olympus series, but I have a copy of The Sword of Summer on my bookshelf that is begging for my attention.

City of Ghosts by Victoria Schwab – The hype surrounding Victoria Schwab’s City of Ghosts is definitely worth the read. I loved this book’s Scotland setting, and Victoria Schwab made me swoon over the Harry Potter references- while I admit that I’m getting tired of seeing HP pop up in every contemporary or semi-contemporary book, I thought Vicotria Schwab incorporated it really well. I’m currently not too interested in continuing on with the series, but I’m interested to see what the new city is in each sequel’s premise.

About The Eye of Zeus: 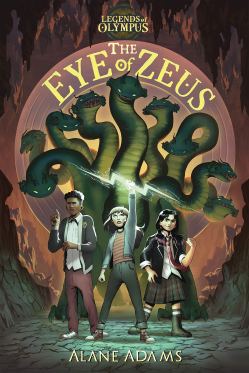 Meet Phoebe Katz, a twelve-year-old foster kid from New York City who’s been bounced around the system her entire life. Things happen around Phoebe, but it’s not like they’re her fault! But when a statue of Athena comes to life, Phoebe gets the stunning news she’s the daughter of Zeus, has a twin brother named Perseus―and was sent away from ancient Greece as a baby to stop a terrible prophecy that predicted she would one day destroy Olympus. Athena warns Phoebe to stay in hiding, but when the vengeful god Ares kidnaps her beloved social worker, Phoebe has no choice―she has to travel back to ancient Greece and rescue him! There, Phoebe and her friends Angie and Damian discover a new prophecy, one that may fix everything. The catch: Phoebe has to collect talismans from six Greek monsters, including the fang from a nine-headed hydra, a talon from the Nemean lion, and a feather from the sphinx. No problem for a girl with the power to call up lightning bolts and change the weather! But can Phoebe collect them all and stop the prophecy before she destroys Olympus?

I was provided with an advance reader copy by the publisher. By no means did this affect my thoughts or opinions.

What are some of your favorite middle grade reads? Is Eye of Zeus on your TBR? Have you read any books by Alane Adams? Share in the comments!

2 thoughts on “My Middle Grade Reads: Inspired by The Eye of Zeus”