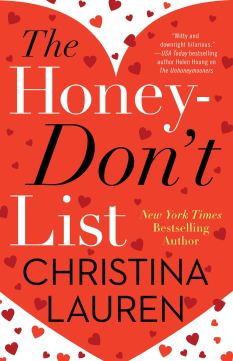 Carey Douglas has worked for home remodeling and design gurus Melissa and Rusty Tripp for nearly a decade. A country girl at heart, Carey started in their first store at sixteen, and—more than anyone would suspect—has helped them build an empire. With a new show and a book about to launch, the Tripps are on the verge of superstardom. There’s only one problem: America’s favorite couple can’t stand each other.

James McCann, MIT graduate and engineering genius, was originally hired as a structural engineer, but the job isn’t all he thought it’d be. The last straw? Both he and Carey must go on book tour with the Tripps and keep the wheels from falling off the proverbial bus.

Unfortunately, neither of them is in any position to quit. Carey needs health insurance, and James has been promised the role of a lifetime if he can just keep the couple on track for a few more weeks. While road-tripping with the Tripps up the West Coast, Carey and James vow to work together to keep their bosses’ secrets hidden, and their own jobs secure. But if they stop playing along—and start playing for keeps—they may have the chance to build something beautiful together…

If you’ve been keeping up with my current contemporary romance quest, you’ll know that I’ve fallen head-over-heels in love with Christina Lauren’s books. And the latest book of this writing duo’s that has caused my feels is their latest release, The Honey-Don’t List. I’m also seriously in love with this book’s cover! The Honey-Don’t List follows Carey and James, two personal assistants to one of America’s reality TV, home improvement couples, the Tripps. One thing America doesn’t know about the Tripps? They can’t stand each other. On the eve of the Tripps’ book tour, James and Carey are forced to join in on their West Coast adventure to keep the peace – and their jobs.

Regardless of its synopsis, I will pick up any Christina Lauren book, but I was especially sold on The Honey Don’t-List’s premise. It must be something about being in your twenties that makes me want to watch a HGTV show or three (and take a trip to Waco, Texas to visit an IRL home improvement couple’s market and bakery). And don’t forget the extra bookish bonus points this one gets for taking place during a BOOK tour.

The Honey-Don’t List has been receiving some mixed reviews, but this book was a near-perfect fluff read for me. The only ‘complaint’ I have is that I don’t really understand the  reasoning behind the book’s title. There’s maybe a handful of references to Mel’s infamous ‘honey-do’ lists for Rusty, but they’re never really explained. They didn’t necessarily need to be, but I feel like they should’ve been since they allude to the title. I interpreted then the ‘don’t’ in the title as the fact that there’s a lot Rusty and Mel can’t do on tour and things Carey and James can’t risk in fear of losing their jobs.

The premise sold well. I loved all the talk surrounding the Tripps’ upcoming Netflix’s show and Carey’s role in the company. It was fun joining the Tripps and co. on the book tour, and I loved learning about how they came to stardom through Carey’s reflections and her conversations with James. Mel Tripp, whose stardom as the wife in the #1 home improvement duo goes to her head, certainly was not the best boss or mentor to Carey. She (deservedly) somewhat takes on the antagonist role. Some of Carey’s perspective really dives into her complicated relationship with Mel. I do wish their was a bit more exploration of Carey’s relationship with Rusty, since they were close before the Tripps’ stardom.

Carey may just be my new favorite Christina Lauren female protagonist! I loved all of her sayings and metaphors. While she definitely has to battle and accept her bosses’ wishes at times, she was such a strong character. She also has a love for junk food, her favorite being Funyuns, that even I envy. I loved her personal journey and really felt she grew by the end. Carey also has dystonia, a motor disorder that affects muscle movement. I had never heard of it before reading this book and really appreciated its representation.

The Honey-Don’t List alternates between Carey and James’ perspectives. I wouldn’t classify their relationship as hate-to-love, but they’re not exactly peachy keen with one another, thanks to the stress of their jobs. As they get to know one another, James begins to understand that Carey is much more than Mel’s assistant, playing a much larger role in Comb+Honey than anyone realizes. Although I did enjoy Carey’s chapters more because I was more invested in her story, I did like James’ story as well. I especially loved the way that he falls head-over-heels for Carey and really admires her.

Overall, The Honey-Don’t List was a really fun read with a great female protagonist. The book included a sneak-peak at the title of Christina Lauren’s next book, In a Holidaze! There aren’t too many details about this October 2020 release just yet, but I am so beyond excited for it thanks to my love for holiday-inspired reads.

Have you read The Honey-Don’t List? What are your favorite Christina Lauren books? Share in the comments!

One thought on “HONEY READ ME: The Honey-Don’t List Review”

I can’t believe it’s already May (but I am so excited we’re a month closer to summer!). One of my favorite books of last month was Jeneva Rose’s ONE OF US IS DEAD. This thriller set in an Atlanta suburb involving an elite group of women and a salon owner was so addicting!
I started reading SADIE ON A PLATE by Amanda Elliot last night and I’m fully obsessed! I cannot wait to pick this back up and probably finish it when I get home from work today.
I’m #currentlyreading the quintessential tik tok made me do it book, THE SPANISH LOVE DECEPTION by Elena Armas. It’s had a slow start so far but I definitely want to hang on a bit more to see what the hype is about.
starting off this Monday by sharing my thoughts on one of my favorite books of 2022, ONE ITALIAN SUMMER by @rebecca_serle . I fell head over heels for this one AND may or may not have cried my way through the ending.
in a move that will surprise literally no one, I have finished watching Bridgerton Season 2!
caught up on some reading this weekend, including Christina Lauren’s upcoming SOMETHING WILDER. I was super lucky to have won a giveaway copy from @christinalauren a few weeks ago and I couldn’t wait any longer to read it. This adventure romance was so unique & fun! The book follows Lily Wilder, who uses her treasure hunting father’s maps to take tourists around the red canyons of Utah for adventure tours… including the love of her life, Leo, who left her unexpectedly ten years ago on her family’s ranch. I can’t wait to share my review thoughts closer to release date on the blog. Thank you so much again to @christinalauren for this opportunity!