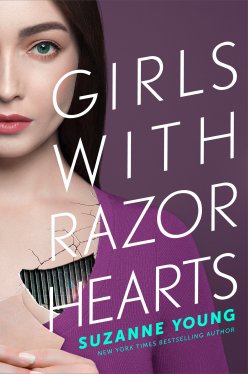 Make me a girl with a razor heart…

It’s been weeks since Mena and the other girls of Innovations Academy escaped their elite boarding school. Although traumatized by the violence and experimentations that occurred there, Mena quickly discovers that the outside world can be just as unwelcoming and cruel. With no one else to turn to, the girls only have each other—and the revenge-fueled desire to shut down the corporation that imprisoned them.

The girls enroll in Stoneridge Prep, a private school with suspect connections to Innovations, to identify the son of an investor and take down the corporation from the inside. But with pressure from Leandra, who revealed herself to be a double-agent, and Winston Weeks, an academy investor gone rogue, Mena wonders if she and her friends are simply trading one form of control for another. Not to mention the woman who is quite literally invading Mena’s thoughts—a woman with extreme ideas that both frighten and intrigue Mena.

And as the girls fight for freedom from their past—and freedom for the girls still at Innovations—they must also face new questions about their existence…and what it means to be girls with razor hearts.

After really enjoying Suzanne Young’s Girls with Sharp Sticks last year, I couldn’t wait to get my hands on the sequel, Girls with Razor Hearts. Girls with Sharp Sticks is set an elite private school, Innovations Academy, where girls are trained to be basically be the perfect companions for men. When Mena begins to suspect that things aren’t what they seem to be, her and the girls begin to rebel against their instructors and investigate what their school’s true agenda.

Girls with Razor Hearts was a solid follow-up novel to Girls with Sharp Sticks. Based on its sequence of events and ending, I suspect that there is going to be at least one more book in this series. That being said, Girls with Razor Hearts did fall into middle book syndrome. In the sequel, Mena and her friends must adjust to life outside of Innovations Academy, which includes facing their past trauma and stress. The girls are also on a mission to find the son of one of Innovations Academy’s prime investors at theor new and almost equally-sexist-as-Innovations school. 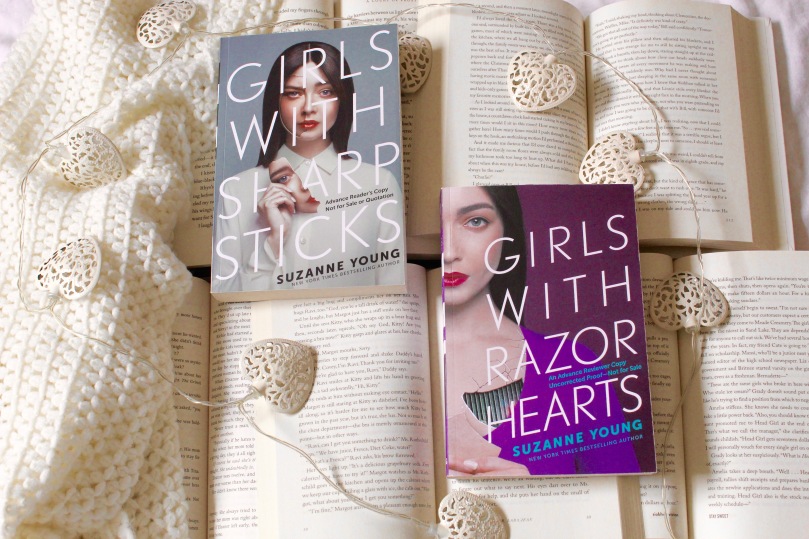 While I won’t be revealing major spoilers for Girls with Razor Hearts in this review, I recommend reading Girls with Sharp Sticks before reading the rest of my thoughts.

Girls with Razor Hearts really felt like a ‘build-up’ novel, meaning that nothing much happened plot-wise until the last 100 pages. There’s much on the inner workings of Innovations and the key players Like the first novel, Girls with Sharp Sticks is really about female empowerment, as Mena and her friends must stand up for themselves and the girls around them. Things are a tad more complicated in this world, being that Mena and the girls aren’t exactly human. Both books feature this sci-fi and dystopian-like twist when it comes to the science of Mena and the Innovations girls, but also in its setting. Girls with Razor Hearts reaffirms that this world takes place in the US, but one in which women are constantly having to defend their rights and are often silenced. It was really sickening to read about the behaviors of Mena’s male classmates.

However, I found that Mena and the girls’ mission got a little repetitive. Yes, they are there to reveal the wrongdoings of Innovations Academy, as well as the sexist culture at their new school, but I was waiting for them to take action instead of talking about what they wanted to do. I understand that the lack of action may have resulted from Mena and the Innovations girls having to deal with and unravel the trauma they experienced at the Academy. While Girls with Razor Hearts does take place in a slightly dystopia setting, the book has many relevant themes and similarities unfortunately to the experience of many women today.

This review is based on an advance reviewer copy. By no means did receiving this ARC affect my thoughts or opinions.

One thought on “ANTICIPATED SEQUEL: Girls with Razor Hearts Review”

One of my favorite YA books of 2021 comes out next week: Becky Albertalli’s KATE IN WAITING! Becky Albertalli’s latest release follows high school senior, theatre nerd, & Jewish teen Kate. Kate and her best friend, Andy, have had the crush on the same guy from theatre camp which is fine… until Matt shows up on the first day of school. As the 3 work on the school musical together, the two are left to discover if either of their feelings for Matt are unrequited after all.
Rainy days like today call for an addicting read or two, & I know I’m going to be hooked by Rachael Lippincott’s THE LUCKY LIST! This June 1st release takes place over a whirlwind summer, following Emily’s quest to complete her late mother’s senior year summer bucket list with Blake, a girl who’s just moved back to town. As the girls complete the bucket list, Emily feels closer to her mom & also begins to feel closer to Blake in a way she wasn’t expecting. Thank you to @simonteen for sending this one my way!
Happy book birthday to Anne-Sophie Jouhanneau’s KISSES AND CROISSANTS! This YA contemporary following Mia’s summer at a ballet school in Paris was the perfect blend of Anna & the French Kiss and Disney+‘s On Pointe documentary series. I posted my full review on the blog yesterday.
Starting off this Monday with a library haul! I did a mini library haul over spring break before I head back to school this week.
Smiling because I have my most anticipated YA book of the year from one of my favorite authors & I’ll be a certified English teacher in a month ☀️🌸
posted my March 2021 TBR on the blog yesterday morning, only to pick up 2 more books that I didn’t mention up from the library later in the afternoon & am now over 150 pages into the book I wasn’t sure I was going to have time to read this weekend ☺️😂