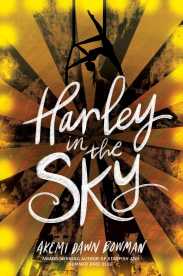 Summary (from the publisher): Harley Milano has dreamed of becoming a trapeze artist for as long as she can remember. With parents who run a famous circus in Las Vegas, she spends almost every night in the big top watching their lead aerialist perform, wishing with all her heart and soul that she would be up there herself one day.  After a huge fight with her parents, who continue to insist she go to school instead, Harley leaves home, betrays her family, and joins the rival traveling circus Maison du Mystère. There, she is thrust into a world that is both brutal and beautiful, where she learns the value of hard work, passion, and collaboration. At the same time, Harley must come to terms with the truth of her family and her past—and reckon with the sacrifices she made and the people she hurt in order to follow her dreams.

I never thought I would prep for writing a review by watching trapeze videos, but here we are!

Akemi Dawn Bowman’s Harley in the Sky follows Harley’s dream of becoming a trapeze artist. After watching aerialists perform all her life in her parents’ famous Las Vegas circus, Harley is ready for her turn to be up there in the big top. After her parents refuse to let Harley to train with the lead artist and insist on Harley going to college instead, she feels that she has no other choice but to join the rival circus, Maison du Mystère. While training and trying to prove her worth, Harley must also face how her decisions affect her family, friends, and the past that she cannot let herself repeat. 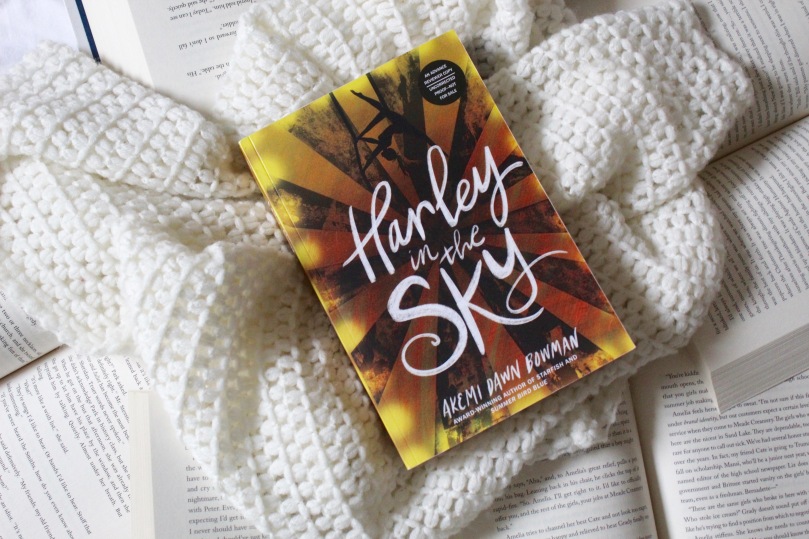 When I picked up Harley in the Sky in early February, I had read only one 5 star read so far in 2020. That quickly changed as soon as I started reading it, soon becoming one of my favorite books of the year! I devoured Harley in the Sky over the course of three sittings, instantly falling in love with Akemi Dawn Bowman’s writing style and atmosphere. Harley in the Sky originally had me intrigued for its circus setting and The Greatest Showman meets Sarah Dessen premise. I am here to confirm that the book absolutely delivered on both fronts, while delviving into such important storylines revolving around family, friendship, mental health, identity, and yes, romance.

Although Harley in the Sky is certainly more than a ‘circus book,’ I can’t help but talk about this setting first. This is the first book I’ve ever read that takes place in the circus realm, and Akemi Dawn Bowman does such a fantastic job of setting the reader in this world. From the performers to the circus tents themselves, she does such as great job describing life at both Teatro dell Notte and Maison du Mystère.

Whenever Harley trained or performed, I couldn’t help but imagine the performance of “Rewrite the Stars” from The Greatest Showman. I also loved how we get to experience other types of performers through Harley’s friends and with Maison du Mystère, see what life in a travelling circus is like. Harley’s transition at Maison du Mystère is certainly not easy and she experiences a lot of emotional and mental barriers. Harley is helped by Vas, Maison du Mystère’s musical composer. I really like the progress of their relationship and while important to the story, I really liked how the relationship focus was more so on Harley’s relationship with herself and with her family.

Within this setting, Akemi Dawn Bowman is able to explore so, so much about Harley and her family. Depsite the fact that they own a circus, Harley’s parents do not want their daughter to become a trapeze artist, especially since it is often a short-lived career. Harley simply can’t wrap her head around it. I understand why Harley felt that she had leave her parents and join Maison du Mystère for an opportunity, but her decision came at a cost that really affects their relationship. Harley also feels quite lost when it comes to both her personal and cultural identity, between her mother’s Chinese and Irish heritage and father’s Italian and Japanese heritage. While on the road, Harley considers what belonging and home truly mean to her. It’s more of a focus in the second half of the book, but there’s so much discussion surrounding Harley’s struggle with her mental health. Her mental health often affects her relationships and her focus. There were definitely some moments and reveals about Harley and her family’s past that shocked me, but Akemi Dawn Bowman really brought Harley’s personal development and relationship with her family together so nicely by the end.

Overall, I cannot recommend Harley in the Sky enough! Akemi Dawn Bowman completely blew me away between her writing style, the setting, and all the elements she was able to uncover and truly develop along the way. I’m really looking forward to checking out her other books, like Starfish and Summer Bird Blue.

This review is based on an advance reviewer copy. By no means did receiving this book affect by thoughts and opinions.

Is Harley in the Sky on your TBR? Have you read any books by Akemi Dawn Bowman? Which one should I pick up next? Share in the comments!

One thought on “A 2020 FAVORITE: Harley in the Sky Review”