Summary (from the publisher): Shane has been doing college all wrong. Pre-med, stellar grades, and happy parents…sounds ideal—but Shane’s made zero friends, goes home every weekend, and romance…what’s that? 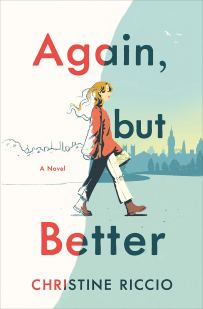 Her life has been dorm, dining hall, class, repeat. Time’s a ticking, and she needs a change—there’s nothing like moving to a new country to really mix things up. Shane signs up for a semester abroad in London. She’s going to right all her college mistakes: make friends, pursue boys, and find adventure!

Easier said than done. She is soon faced with the complicated realities of living outside her bubble, and when self-doubt sneaks in, her new life starts to fall apart.

Shane comes to find that, with the right amount of courage and determination one can conquer anything. Throw in some fate and a touch of magic—the possibilities are endless.

Let me start off by saying that I really wanted to enjoy Again, but Better.

Like many, Again, but Better was one of my most anticipated spring releases. Christine Riccio of polandbananasbooks was the first BookTuber I watched. Her channel really introduced me the online book community back in 2014 and many popular and contemporary YA books.  I love college YA books and based on the premise, I thought I would be able to relate to Shane and her story, as my first year of college was filled with many ups and downs. The book follows college junior Shane who decides to throw off her a pre-med track for a semester by studying abroad in England for a creative writing program.

Again, but Better’s synposis did not deliver. This book is definitely more heavy on the dialogue, but told from her first person perspective, Shane doesn’t really explain why she hasn’t had the best college experience thus far. In addition, while this is likely considered a spoiler, I did not like the time travel at all. Having not expected the magical realism at all, this element did not mesh well with the story. Shane is supposed to be doing study abroad to have second chance at college, then she basically gets a second chance to redo study abroad.

What also threw me off with this book is how much Shane was really Christine. I know we are supposed to separate the author from the story, but Christine made it really hard to do so with this book. Before and after writing Again, but Better, Christine has discussed how her first two years of college were a struggle and going abroad really changed her experience. In her author’s note, she does acknowledge that some of Shane’s experiences were modeled off her own. While I think it is likely fun for authors to insert their own personality and traits into their characters, Again, but Better goes a bit too far. This may be a result of me being a longtime viewer of polandbananasbook, but Shane screams Christine: from her interest in The Da Vinci Code to Lost to Taylor Swift, to Shane’s blog name that is so closely modeled to polandbananas, to her Italian last name, to her physical appearance and while small, the fact that Shane’s favorite t-shirt is her tiger crop top! Speaking of fandoms, I also grew tired  of the pop culture references. I’m still confused over why Miley Cyrus’ Wrecking Ball was referenced so much and I’m so sick of TFIOS being referenced across other books and pop culture.

I also couldn’t get behind this book’s writing style. Much of my disconnect with the writing style was likely a result of of Shane’s personality. The journal entries were also just so completely unnecessary, since they were also written by Shane in the first person. Shane’s thoughts in these entries could have easily been worked into the narrative.

My favorite elements of Again, but Better did include Shane’s travel experiences and her interactions with the side characters like Babe and Atticus. I also did genuinely her time interning at the magazine company and her interactions with her co-workers. Unfortunately, one person I could not get behind was Again, but Better second biggest character, Sane’s love interest Pilot. I could not stand how he is worked into the time-traveling bit. I think him and Shane spent too much time apart in both parts of the novel for them to work as a couple and have feelings.

Overall, I was really disappointed with Again, but Better. Unfortunately, what I didn’t like about it outweighed what I did like about it. Christine Riccio’s writing style does show promise, considering that it’s her debut, but I think this book really could have improved from better plot and character development.

Have you read Again, but Better? Share in the comments!

4 thoughts on “WISH I LIKED IT: Again, but Better Review”