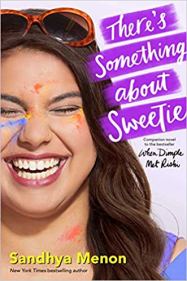 Ashish Patel didn’t know love could be so…sucky. After being dumped by his ex-girlfriend, his mojo goes AWOL. Even worse, his parents are annoyingly, smugly confident they could find him a better match. So, in a moment of weakness, Ash challenges them to set him up.

The Patels insist that Ashish date an Indian-American girl—under contract. Per subclause 1(a), he’ll be taking his date on “fun” excursions like visiting the Hindu temple and his eccentric Gita Auntie. Kill him now. How is this ever going to work?

Sweetie Nair is many things: a formidable track athlete who can outrun most people in California, a loyal friend, a shower-singing champion. Oh, and she’s also fat. To Sweetie’s traditional parents, this last detail is the kiss of death.

Sweetie loves her parents, but she’s so tired of being told she’s lacking because she’s fat. She decides it’s time to kick off the Sassy Sweetie Project, where she’ll show the world (and herself) what she’s really made of.

Ashish and Sweetie both have something to prove. But with each date they realize there’s an unexpected magic growing between them. Can they find their true selves without losing each other?

Between her past three books, Sandhya Menon is becoming one of my go-to YA contemporary authors. For some reason, I’ve picked up her latest release every year in June, so this year I saved There’s Something About Sweetie for that month. In short, There’s Something About Sweetie is my new favorite Sandhya Menon novel! I just fell head over heels in love with Ashish and Sweetie as a couple and as individual characters.

“But with Sweetie time passed in gentle waves. A conversation with her was like a warm hug and a cup of hot coca on a cold day – comforting, familiar, a place you never wanted to leave” (175).

There’s Something About Sweetie is such a sweet  YA rom-com. If Ashish’s father said ‘hanky-panky’ one more time, even I would have expected Sweetie to lose it! The book takes a comedic sort of turns in one of the main protagonist’s lives, as the charming Ashish’s heartbreak over his breakup with his girlfriend Celia drives him to allow his mother and father to choose a girl for him. It seemed to work with Dimple and Rishi, right? When Ashish’s parents try to set him up with Sweetie, Sweetie’s mother declines the relationship because of her daughter’s weight. 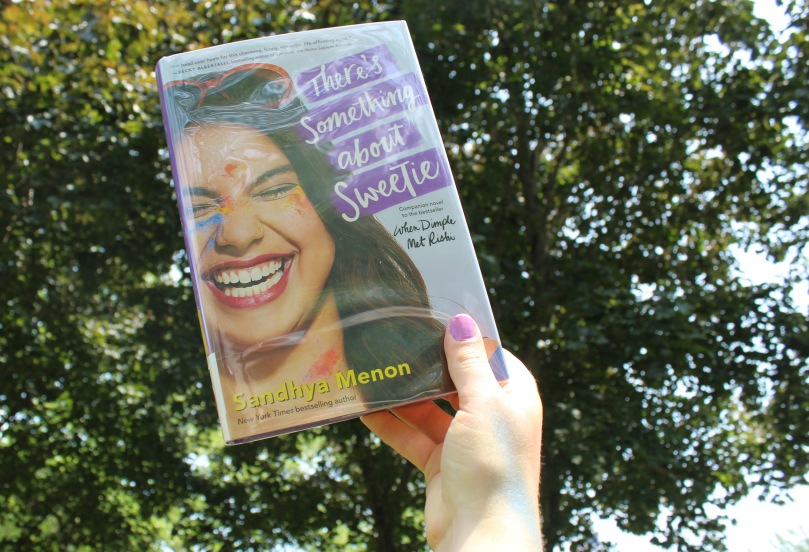 As Sandhya Menon mentions in her foreword, Sweetie’s relationship with her mother over her being fat isn’t easy to read sometimes. While there’s no denying that Sweetie’s mother loves her daughter, it was really hard to see her try to dictate Sweetie’s life because of her weight. Sweetie is not ashamed to be fat or call herself fat. While there are discussions in the book about Sweetie’s appearance and how people make often incorrect judgments about fat people, the book is not about Sweetie’s insecurity or her identity as a fat person. Sweetie is one of the most confident YA protagonists that I have ever read. How else could she be the fastest person on her high school track team and have an incredible singing voice?

In When Dimple Met Rishi and even in the beginning of There’s Something About Sweetie, Ashish comes off as a rebel and a bit of bad boy, grabbing the attention of every girl. However, as Sweetie also believes, Ashish always came off as a very sweet and sincere character to me. I admit that I am usually more invested in the female POV in dual POV books, but I genuinely enjoyed both perspectives. Throughout all of her books, I really enjoy Sandhya Menon’s writing style, using third person with two perspectives.

As always, Sandhya Menon welcomes readers into Indian culture and traditions. I think in the US especially we have so much trouble wrapping our heads around arranged relationships, let alone marriage, but it is so refreshing to have characters like Rishi and Sweetie (and even Ashish now) who are very open-minded towards it. I really enjoyed both Sweetie and Ashish’s appreciation and respect for their family.

We also need to take a minute to appreciate the beauty that is the US There’s Something About Sweetie hardcover edition. Once again, we have been given an amazing front cover- Sandhya Menon truly has some of the best covers that have real people on it- and I love the back cover, with Ashish and Sweetie ready to race on the track. As always, I love how well Sandhya Menon’s books all correspond with one another, between its cover and jacket art and typography. While fairytale retellings, I hope her new series, Of Curses and Kisses, will be similarly designed. A bit sidenote, but somewhat relating to this cover lust, I was revisiting my review for From, Twinkle With Love and I forgot that this book was formerly entitled When Ashish Met Sweetie.

Overall, I absolutely adored There’s Something About Sweetie for its rom com vibes and sweet characters. I’m highly anticipating Sandhya Menon’s next novels, Of Curses and Kisses and 10 Things I Hate About Pinky.

As Kismet Would Have It Mini Review 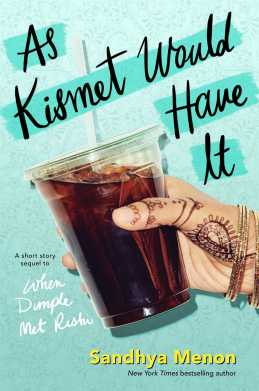 Anyway, As Kismet Would Have It takes place about a year after When Dimple Met Rishi. As Rishi and Dimple come up on their one year anniversary, the two are thinking about their next steps, which includes marriage. While Rishi, the romantic, is all about marrying Dimple, Dimple is unsure about this big step, considering her views on marriage and career desires. What she doesn’t doubt, however, is her love for Rishi.

As Kismet Would Have It was such a fun way to jump back into Rishi and Dimple’s world. While they make an appearance or two in There’s Something About Sweetie, this novella is all about them. It was such an adorable story and answers many readers’ burning questions about what will happen to this couple. Aside from Dimple and Rishi of course, my favorite part of the novella was Dimple’s mom, including her Twilight references!

Have you read There’s Something About Sweetie? What about When Dimple Met Rishi or From, Twinkle With Love? Are you anticipating Of Curses and Kisses and 10 Things I Hate About Pinky? Share in the comments!