Don’t get me wrong, book conventions are all about being in bookish environments and having fun. But don’t get me wrong, they can be very stressful, even with a highlighted Excel sheet in tow. I couldn’t be more excited for Thursday, but this day was filled with many of my most-wanted books of the year and most of them were only available that day. My absolute priorities were Emery Lord’s The Map from Here to There and Ruta Sepetys’ The Fountains of Silence.

My second day of Book Expo 2019 started with my 8:30 arrival at the Javits with Dunkin’ iced coffee in tow. I took the half hour of sitting in line to go over PW Daily and read over my schedule. 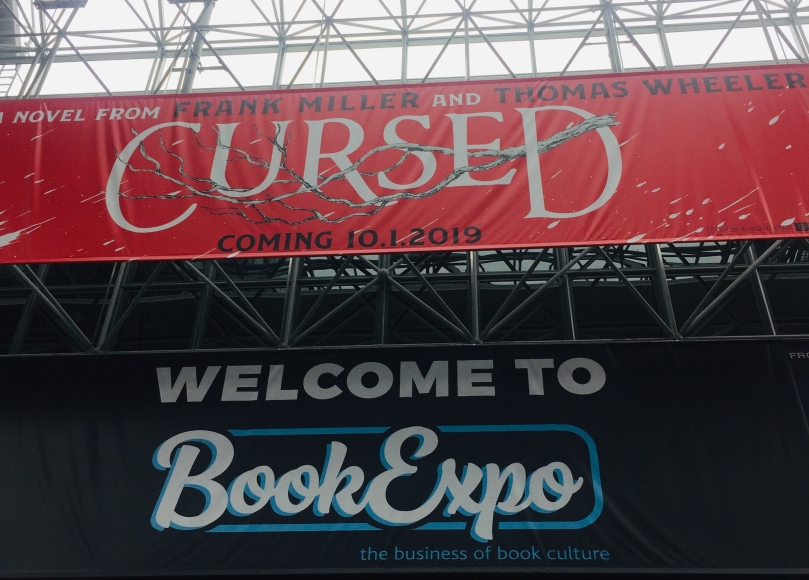 When I got on the showfloor, I picked up Cara Wall’s The Dearly Beloved from Simon & Schuster and Elizabeth Ames’ The Other’s Gold from Penguin. Penguin Random House was being pretty quiet about their drops throughout the convention, so I often just checked their booth whenever I had a break in the day to see what was going on.

My stress books and events didn’t start until 10:30, so I spent some time walking around, picking up Renegades swag and Nadine Jolie Courtney’s All- American Muslim Girl. From there, I lined up for Hachette’s 10:30 ARC drop, picking up Sarah Henning’s Throw Like A Girl and The Bone Houses, which I later passed on to Taschima from For the Sake of Reading. I got my desired fantasy and historical fiction reads, but contemporary was the name of my Book Expo.

Returning to stress, the night before I should’ve been able to get 7 hours of sleep. In reality, I only got about 5. Why? Because I was stressing out about getting an ARC Emery Lord’s The Map from Here to There. Now readers, I know that not getting this book would not have been the end of the world. There was another drop on Friday, not to mention that the finished shiny copy will be out in January. But let’s be honest: this book was in my top five most wanted books of Book Expo, if not my number 1 goal. I ran for this 11 AM drop right after Hachette. While a line had formed, my spot was close enough where I was guaranteed the book! 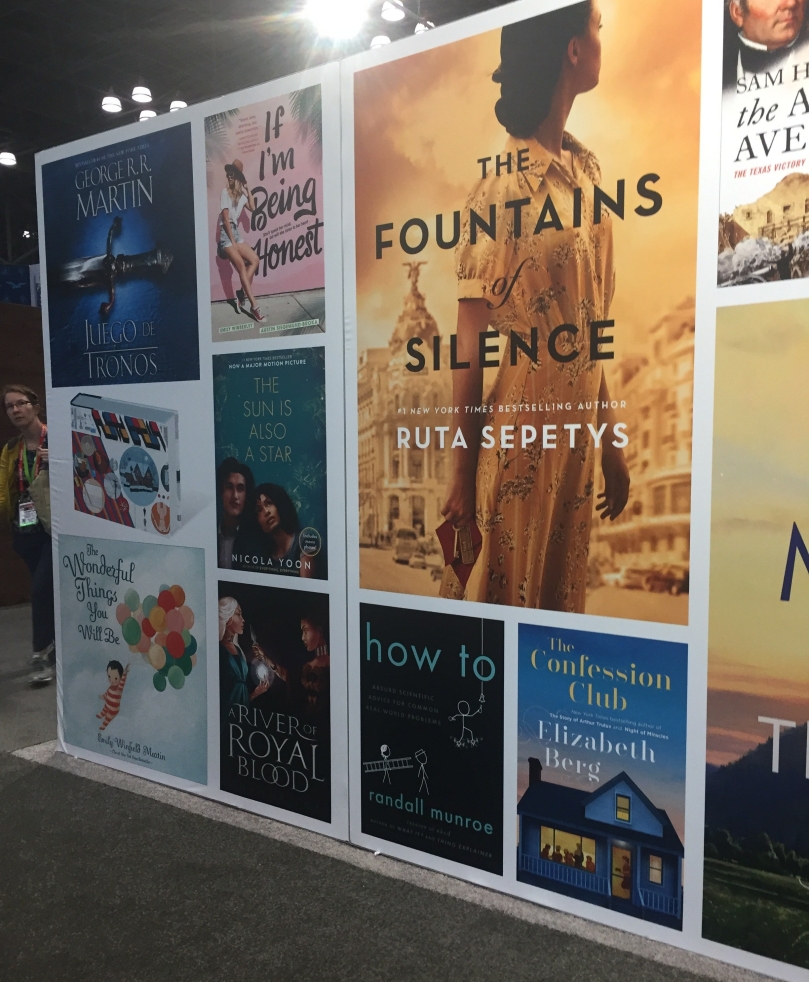 What had also caused me stress during this 11 AM time slot? Penguin’s drop of The Fountains of Silence. This had originally been intended to be a signing, but Ruta Sepetys unfortunately couldn’t make Book Expo so the ARCs would just be given out. Bloomsbury and PRH were right across from each other, so I decided to take my chance and see if the book was available—and there were many copies stacked on the floor when I got there! A week later, I’m still in shock that I got two of my most anticipated releases within two minutes of each other.

I then returned to Hachette for their 11:30 AM ARC drop, where I received Nandini Bajpai’s A Match Made in Mehendi. The running back and forth didn’t stop there, with the next stop being Mary H.K. Choi’s signing for Permanent Record. It felt pretty full circle meeting Mary H.K. Choi and picking up the book, considering that I read Emergency Contact on lines at Book Expo last year. She was really cool and I was also given pins that corresponded with the cover. I stayed in the Autographing Area for one more signing, this time for Brittney Morris’ Slay. After, I went to HarperCollins- who was much more organized and calmer than last year- for a drop of Thanhha Lai’s Butterfly Yellow. 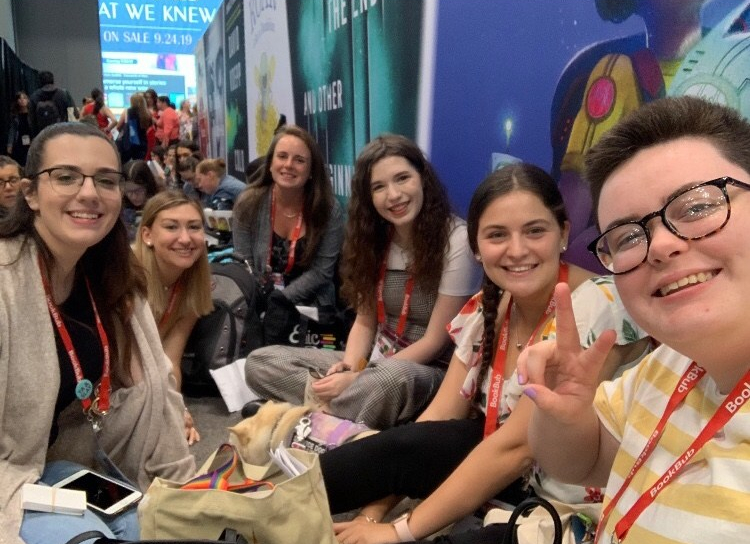 After running from book to book, it was time for a much needed chicken fingers and a bathroom break. After, I returned to HarperCollins’ for their 2 PM drop of Unpregnant with Cait (including Leia) from Cait’s Books, Ben from Ace of Bens, and Jess from The Book Bratz. We reminisced a lot about Book Con 2018. Right before I lined up, Cait had so generously given me her pass for Marie Lu’s signing for Rebel. From the Unpregnant drop, I went to Jen Wang’s Stargazing signing. It was such a cool experience meeting her, since The Princess and the Dressmaker is my favorite graphic novel. From Stargazing, I went to Marie Lu’s Rebel sampler signing. I’m bummed that there won’t be Rebel ARCs, but yet again, I appreciate not having to go through the likely chaos. I’m so glad to add this to my collection especially since my Legend trilogy is signed, and meeting Marie Lu was lovely as always.

After Marie Lu’s signing, my five hours of sleep hit me pretty hard. I didn’t have much planned for the rest of the day other than a later meeting, so I decided to line up with a few friends for Natasha Ngan’s Girls of Storm and Shadow. My tiredness was likely a factor, but the long line was the slowest of my Book Expo 2019 experience and where I had been waiting in line was a break for other people to keep passing through. I ultimately ended up not staying for the signing, taking the rest of the day to meet up with more friends and go to my meeting. Meeting with everyone put me in a much better mood and I loved catching up with everyone. And with that, Thursday of Book Expo 2019 was over. 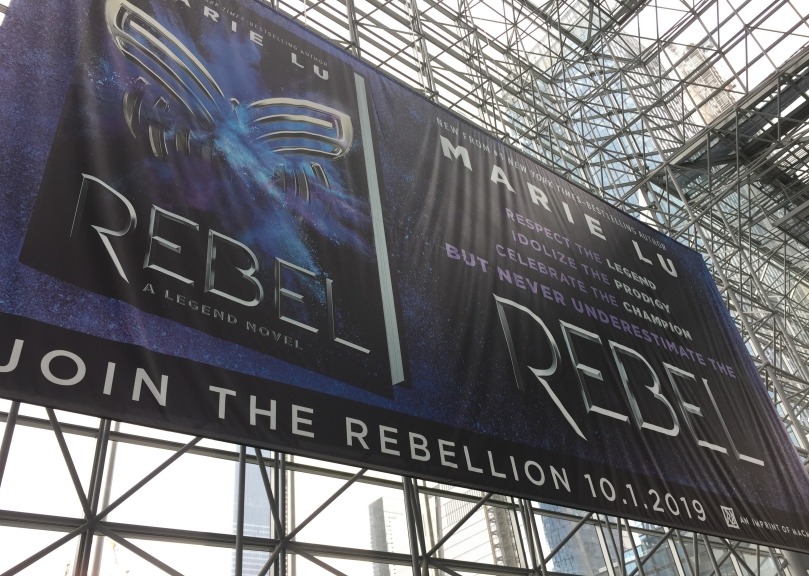 Check out my other Book Expo 2019 posts as the week goes on:

Did you attend Book Expo or Book Con? If you could meet one author, who would it be? Share in the comments!

4 thoughts on “STRESSING OUT OVER BOOKS WITH FRIENDS: My Thursday at Book Expo 2019”