Skip to content
Search
Close
Summary (from the publisher):
Imogen Lovelace is an ordinary fangirl on an impossible mission: save her favorite character, Princess Amara, from being killed off from her favorite franchise,

Starfield. The problem is, Jessica Stone—the actress who plays Princess Amara—wants nothing more than to leave the intense scrutiny of the fandom behind. If this year’s ExcelsiCon isn’t her last, she’ll consider her career derailed.
When a case of mistaken identity throws look-a-likes Imogen and Jess together, they quickly become enemies. But when the script for the Starfield sequel leaks, and all signs point to Jess, she and Imogen must trade places to find the person responsible. That’s easier said than done when the girls step into each other’s shoes and discover new romantic possibilities, as well as the other side of intense fandom. As these “princesses” race to find the script-leaker, they must rescue themselves from their own expectations, and redefine what it means to live happily ever after.

I’ve been devouring books over a day or so this month, including Ashley Poston’s The Princess and the Fangirl. I have a sweet tooth for fandom-focused stories, much like the first book in the Once Upon a Con series, Geekerella. Although I haven’t read too many, Geekerella is my favorite Cinderella retelling. Like the other books in the series, Ashley Poston puts a fandom spin on fairytales, with the fandom in focus being the fictional sci-fi TV and film series, Starfield. The latest book in the series, The Princess and the Fangirl, is a Princess and The Pauper retelling. Starfield movie star Jess and fangirl Imogen switch places during Excelsicon, the Stafield convention.

The main plot of the book revolves around Jess, who has been criticized for her performance and lack of passion in playing the Starfield female lead, figuring out who is leaking her stolen script of the film’s sequel. While Jess debates if she even wants to be part of the sequel, Imogen is determined to save Jess’ character, Princess Amara, from being just another female character who there to evolve the male protagonist’s journey. I admit that I didn’t care so much for this particular aspect of the plot, aka finding the person behind the leaked script. I was more interested in Jess and Imogen’s character development and relationships.

Jess definitely experiences the most character development throughout the book, as she deals with the pressure of playing Princess Amara and figuring out the future of her acting career. Readers may have an easier experience relating to Imogen’s POV because of her passion for all-things fandom. It was interesting to see Jess and Imogen uncover things, both good and bad, about the Starfield fandom from their reversed roles. While Imogen gets to embrace her love for Starfield, I also liked seeing Jess try to figure out her own relationship with the fandom. 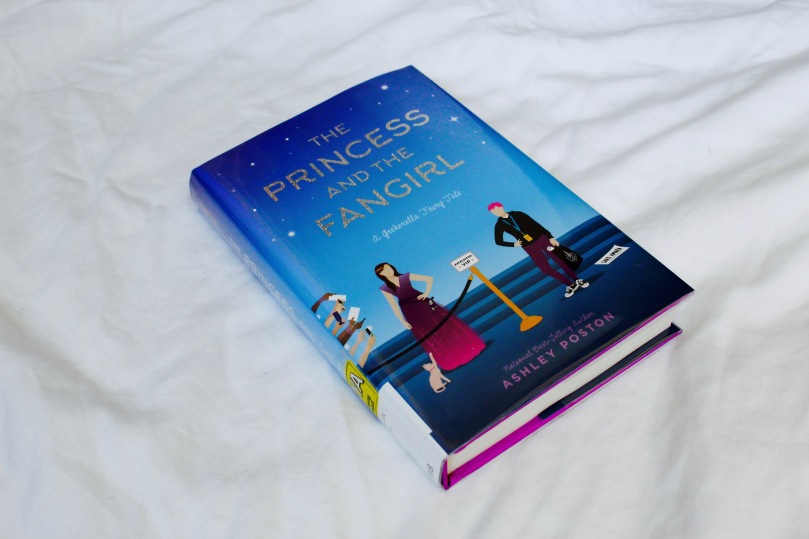 My favorite aspect of The Princess and the Fangirl was hands-down its setting, Excelsicon! Excelsicon is a convention dedicated to Starfield. One of my few criticisms of Geekerella is that we only spent a small portion of the book at the convention, despite that much of the story lead up to the event. That being said, I was thrilled that The Princess and the Fangirl entirely takes place at Excelsicon. From Artists’ Alley to panels, I loved the fandom-centric atmosphere. It was so much fun being on the floor with the characters as they understandably geeked out over their favorite fandoms. Also, please sign me up for the after show karaoke parties.

Another fun element of The Princess and the Fangirl was the incorporation of characters from Geekerella. While I didn’t remember everyone from Geekerella since its’ been two years since I read it, it wasn’t too difficult to adjust to their roles in this book. It was actually very cool to see how their lives had changed in the year between the two companion novels. And yes, I very much still need to try a vegan taco from the Magic Pumpkin.

Overall, I recommend The Princess and the Fangirl for readers who love Geekerella or fandom-focused stories and are looking for a book that takes place in the nerdiest setting of them all: a fan convention! I don’t think its coming out until 2020, but I’m already anticipating the third book in the Once Upon a Con series. It’s going to be a fandom retelling of Beauty and the Beast!

Have you read The Princess and the Fangirl or Geekerella? What books featuring fandom have you enjoyed? Share in the comments!

One thought on “CALLING ALL CONVENTION LOVERS: The Princess and the Fangirl Review”