Although my TBR still quite scares me, I’ve been rereading books more and more over the past two years. As discussed in my 2019 rereading goals, I want to reread some of my favorite series this year, including Stephanie Perkins’ Anna and the French Kiss trilogy. I am so happy to say that I read all three books in April! During a particularly stressful month at school, this trilogy was such a fun way to de-stress, transporting me to Paris, San Francisco and NYC (with some cute boys in tow). While all these books are so atmospheric to their setting, I forgot how character and relationship driven these books are. While not necessarily a bad thing, I ended up changing what book in the series is my favorite. 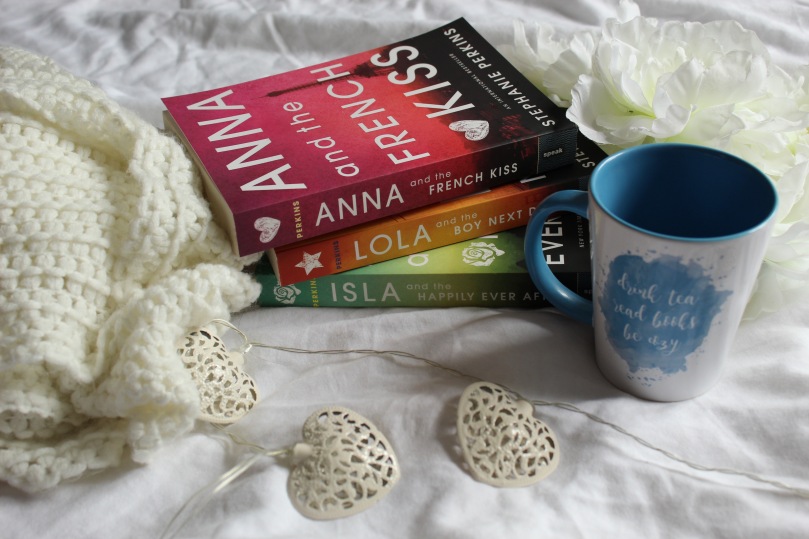 Anna and the French Kiss was one of my favorite reads back in 2015. I’ve discussed this before, but Anna and the French Kiss had haunted me in my library’s YA section for a while. Its original cover kept me away. Upon discovering YouTube and the book’s gorgeous paperback cover redesign, I was called away to Paris with Anna and St. Clair. The settings and atmosphere throughout the series are perfection, but nevertheless, Anna and the French Kiss made me want to book a flight directly to a French bakery ASAP. My craving and need to try caramel eclairs and chocolate and raspberry gateaus are at all time highs. Aside from the food she gets to eat, I liked Anna for her interest in film (all the protagonists in each book have their own ‘special’ interest), making me want a more realistic trip (as compared to Paris) to my local movie theater.

However, my read of Anna and the French Kiss made me realize that this books has its faults. As many of you know, I have read a lot of contemporary YA books between 2015 and 2019. While Anna and the French Kiss is of course still a very enjoyable read, I realized upon my reread how much YA contemporary has grown in its writing style and character development since then. I found Anna to be very immature and unlikeable at times. I know part of the story is her trying to figure out life abroad and trying to make new friends, but I wanted to push her out of her dorm room and into Paris so much. She also made some not so smart decisions about her relationships. In addition, while St.Clair is very much still our YA dreamboat and had a lot going on in his personal life, I wish he 100% committed himself to Anna – he was borderline cheating. But nonetheless, Stephanie Perkins makes readers want to transport themselves to Point Zero meet St.Clair and co..

Lola and the Boy Next Door | Reread Rating: 5/5 Stars

I am here to admit that pervious to this reread, I considered Lola and the Boy Next Door to be my ‘least favorite’ read in the series. However, I am now consider this sequel to my favorite of the trilogy! I absolutely gobbled Lola and the Boy Next Door up in less than two days during a particularly busy school week. San Francisco was already on my travel bucket list, but this book made me want to visit the city even more. The Seward Street slides are now a must-visit spot.

I just fell so hard in love with Lola, her story, and all the people in her life. I’m all for fashion-loving protagonists, and Lola just might be the queen of that title with her crazily unique outfits and her budding fashion designer self. She definitely has a loud personality (would you show up to your high school dance dressed like Marie Antoinette?), but it just worked so well for this book. We spent just the right amount of time between Lola and her romance and Lola and her family. I know many readers have much love for St.Clair, but Lola’s love interest, Cricket, is my favorite love interest of the series. The two’s chemistry was just so spot on. His quirkiness and style matched Lola’s so perfectly. How could you not love a cute, smart & fashionably-dressed boy who will bring Blow Pops while going on a dog walk with you?? While Lola and Cricket are my favorite OTP in this series, I loved the appearance of a certain OTP as secondary characters in this installment. For the sake of spoilers I won’t name them, but if a certain British boy worked on my local movie theater, I’d offer to work for free.

Isla and the Happily Ever After | Reread Rating: 4/5 Stars

Out of the three, Isla and the Happily Ever After was definitely the most character and relationship driven book. This installment largely focuses on Isla and Josh’s relationship during their senior year in Paris. Despite that Isla experiences some character growth, much of her development surrounds her relationship with Josh. Just like the first two installments, Stephanie Perkins transported me to all the different places Isla and Josh visit. While I still enjoyed this reread, I’ve determined that Isla and the Happily Ever After is my ‘least favorite’ book in the trilogy. Yes, I know these books are about cute relationships, but Isla and Josh’s relationship just felt too insta-love and too-serious-too-fast (can you tell that I am maturing as a YA reader?). While I liked the time she spent with Kurt and her sisters, I wanted more Isla time/Isla-without-Josh time.

Have you read the Anna and the French Kiss trilogy? What books have you reread this year? Share in the comments!