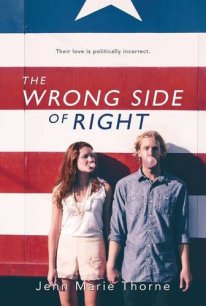 Summary: High school junior Kate Quinn’s life becomes all the more unexpected when she meets her birth father in her aunt and uncle’s living room. In light of her mother’s death, Kate’s year has been a reality that she never thought possible. Not only does Kate have a father, but he happens to be a very powerful senator who running to be the President of the U.S. Suddenly, Kate is moving in with a family she’s never met, joining a political campaign she hardly does anything about, and finding herself in love with a boy everyone tells her she should not be associating with.

The Wrong Side of Right is one of those books that I can’t believe didn’t pass through my TBR radar until 2019. I even consider myself to be a connoisseur of my local library’s YA section, where this book has been since 2015! Shoutout to one of my favorite BookTubers, Kristin of Super Space Chick, for sharing this gem in her ContemporaryAThon TBR.

Although I haven’t read too many books that involve the subject, I really enjoy books that feature politics. The Wrong Side of Right  reminded of Morgan Matson’s The Unexpected Everything. While Andie gets out of her father’s political spotlight inThe Unexpected Everything,  The Wrong Side of Right is quite the opposite, as Kate is thrown into her father’s presidential campaign for the summer.

I absolutely flew through this YA contemporary, reading it over the course of one day! Between Kate’s story and Jenn Marie Thorne’s writing style, I was unable to part from this book for too long. Readers are thrown right into Kate’s unusual situation from the get-go, meeting the father she’s never met, who happens to be up for the Republican nomination in the presidential election. It was so much fun exploring this new world alongside Kate, between prep meetings, wardrobe choices, and yes, a particularly harsh campaign manager or two. I really enjoyed Kate as the main character because she was such a realistic protagonist, in yes, a very unrealistic situation.

While Kate’s relationship with her father is at the heart of The Wrong Side of Right, I also loved the book’s secondary characters. Meg, Kate’s stepmom, was my favorite character. Thorne could have easily made Meg out to be Kate’s antagonist, but she was one of the most supportive people in Kate’s life. Gabe and Gracie made the cutest sibling duo. While I’m quite content with the book’s ending, I did think about a possible alternate ending with Lou, the most supportive and funny member of the campaign. And hellooooo Andy Lawrence, aka the president’s very attractive son (who also happens to be the campaign’s enemy, so to speak).

The Wrong of Right has plenty of sweet and heart-warming moments, however, not everything is so hunky-dory for Kate. She is still reeling over the death of her mother, and she doesn’t necessarily hit it off with her newly-discovered father. Some of their father-daughter moments together were definitely a bit dismaying to read, but I liked where the author leaves the two by the end.

Overall, The Wrong Side of Right is the kind of contemporary that you simply can’t put down for its intriguing story and amazing cast. I am very much looking forward to picking up Jenn Marie Thorne’s latest book, Night Music, in the near future.

Have you read The Wrong Side of Right? Share in the comments!

2 thoughts on “LOVE & POLITICS: The Wrong Side of Right Review”