Besides Treat Yo’ Self (the best day of the year), the best holiday to come out of Parks and Recreation is Galentine’s Day. Created by Leslie Knope, Galentine’s Day is all about celebrating with your best gal pals. 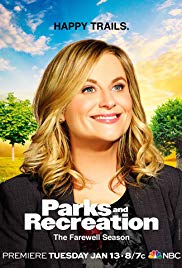 In honor of Galentine’s Day, I think it is about time that I’ve shared my favorite episodes of Parks and Recreation. If you don’t already know, I am a Pawnee Goddess by heart. Parks & Rec’s humor and messages has always resonated to me. It’s my go-to TV show for comfort and laughs. I live in fear of this show being taken off Netflix and Amazon Prime, hence why I need to get the DVDs in my life ASAP.

Choosing the following episodes out of 125 options definitely wasn’t an easy task, but I’ve had so much fun reflecting on the show. Each favorite episode is listed by season and episode  number.

“Hunting Trip” (S2. E10)– I admit that the first two seasons of Parks & Rec are bit hard to get into, but the office’s trip to Ron’s cabin features plenty of funny moments. This episode also highlights the chemistry between Andy and April.

“Park Safety” (S2. E19)– Blame it partially on my love for Brooklyn Nine-Nine, but I love this episode for Andy Samberg playing the park ranger.

“The Fight” (S3. E13)– “The Fight” is arguably one of the best episodes of Parks & Rec, if only for the scene where everyone is drunk on Tom’s latest money-making scheme, snake juice.

“The Comeback Kid” (S4. E11)–“The Comeback Kid” may be the most iconic Parks & Rec episode, especially for the gang’s attempt to get Leslie on to the platform at her ice rink event. And who could forget Ben’s stop-motion film that may rival Avatar?

“Bus Tour” (S4. E.21)– I’m guaranteed to laugh in almost, if not all, at every scene in “Bus Tour.” My favorite plot line of the episode is Andy, aka Burt Macklin, trying to determine who pied Jerry at one of Leslie’s campaign events.

Ron and Diane (S5. E9)– I absolutely love everything about “Ron and Diane.” It’s also the show’s best Christmas episode. From Leslie’s running away from Tammy to Ben’s shock over Jerry’s wife and lastly, Andy’s surprise that Santa is at Jerry’s party, this is another episode where I laugh at every scene.

“London: Parts 1 & 2” (S6. E1)– If I can only choose one favorite scene from this episode, it’s Andy thinking that Buckingham Palace is Hogwarts.

“Farmers Market” (S6. E11)– Leslie and Ben’s clash over the Farmers Market is so funny, and I love Ann’s taking over wine and cheese club to complain about her pregnancy and Chris. My favorite part of the episode is Ron’s excitement over listening to Willy Nelson on the “rectangle.”

“Ann and Chris” (S6. E12)– Aside from the series finale (because how could you not??), “Ann and Chris” is the only episode where I cry. I love Ann’s reaction to Ron’s goodbye and Leslie’s goodbye to Ann at the end of the episode always gets me. I also LOVE the final shot over Pawnee.

“Leslie and Ron” (S7.E4)– My answer is probably ever-changing, but “Leslie and Ron” is my favorite Parks & Recreation episode. This episode explains what went down between Seasons 6 and 7, and features so many hilarious moments between the two. Leslie’s attempt at signing “We Didn’t Start the Fire” is truly iconic.

“Ms. Ludgate-Dwyer Goes to Washington” (S7. E8)– This episode really brings April’s storyline together and I love how much it shows Leslie and April’s relationship. However, I think my favorite scene of the episode is Andy’s parking lot scheme in hopes of getting April a job at the accounting firm.

Are you a Parks & Recreation fan? What are your favorite episodes? Share in the comments!