Blame it on the holiday season for making me crave Hogwarts and butterbeer. Like many readers, I crave cozy reads during Christmas time, and Harry Potter happens be one of the most atmospheric choices. Since 2018 marks the 20th anniversary of Harry Potter and the Sorcerer’s Stone, today I’m going to be talking about my experience with the Harry Potter series and franchise.

I was not the biggest Potterhead growing up. Looking back, this sort’ve surprises me, considering that it was my mom who first fell in love with the series and made sure to get each book upon their respective release. This is a HUGE deal for my mom, who is not only an avid reader, but an avid library user (AKA she rarely buys books). One of my best friends is also a huge fan of the series—she reread it at least thirteen times- and I was a bit envious of her Hermione Halloween costume one year. It came with a wand- I think this was before Universal opened the Wizarding World of Harry Potter in Orlando and having a wand wasn’t that common.

However, I read at least the first four books when I was about nine or ten years old, but I think I stopped while reading Order of the Phoenix. I don’t know what exactly caused me to stop reading it. I think it might’ve been partially due to the fact that I didn’t really read fantasy as a kid, other than Cornelia Funke’s Inkheart trilogy. It’s definitely a bit shocking now, considering that Order of the Phoenix is in my top three favorite HP books. I also saw Goblet of Fire in theaters, so looking back, I am happy to say that I saw at least one during its release.

Flash forward to the summer before my senior year of high school. I think I’ve mentioned this a few times before, but I spent a lot of time following the online book community during my junior and senior year. I discovered Booktube in 2015, and I started consistently reading book blogs. Thanks to Glee, my biggest celeb crush in my middle school and high school days just happened to be Darren Criss, which of course meant endlessly watching StarKid’s A Very Potter Musical. Between the fact that some of my closet friends were HP fans, the obvious love for HP online, and yes Darren Criss, I decided to give the books a try and start off where I left off with Order of the Phoenix. Fast forward to two weeks later, having finished reading Order of the Phoenix, Half-Blood Prince, and Deathly Hallows. I actually finished reading Deathly Hallows in less than two days!

I don’t know what stuck with me as a sixteen-year old that didn’t as a ten year old, but rereading the last series of the books made me fall in love with Harry Potter. Perhaps it’s that as each book goes, Harry and co. deals with darker and more mature storylines that I was able to relate to more.Yes, I am that person who loves Order of Phoenix and NO , Harry is not just an angsty teen.  After reading the last three books, I went back and read the first four books again– because this reading order obviously makes sense, right?Overall, these books are just so incredibly built and filled with characters that you just easily fall in love (enter my new crush on Neville Longbottom/ Matthew Lewis).

-Bonded with my HP loving friends and my sister, who read the Sorcerer’s Stone and Chamber of Secrets in school. Why was this not a thing when I was in the fifth grade?? She went on to read the rest of the series and owns the paperback versions whose spines make Hogwarts

-Both book & movie, the scene with the resurrection stone in Deathly Hallows makes me cry EVERYTIME

-I own 10 Harry Potter Funkos

-Went to a HP trivia night at my school. My team lost, but we were pretty proud of our name, Dobby’s Socks 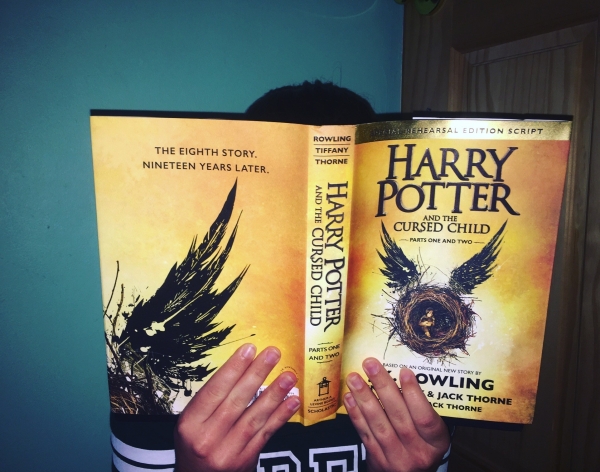 HP Things I’m hoping to do:

–  Cursed Child on Broadway. This isn’t a must-do for me, since I wasn’t a huge fan of the play. However, I’ve heard that it’s much-better performed and I would love to see how the magic works.

-Collect more of Alex and Ani’s HP-inspired jewelry. I really like their HP earrings and bracelets

I think it’s safe to say that Harry Potter will always be a part of my life, and I appreciate that every generation will get to experience HP in some way. I love Brian Seltznick’s 20th anniversary covers (I have a poster that connects all covers and the 20th anniversary tote bag) and I really love the illustrated editions. They’re so detailed and they’re a great way to get kids into HP even at a younger age. And please keep giving me ALL the HP Funkos.

Are you a HP fan? What have been some of your HP experiences? Share in the comments!

2 thoughts on “My Harry Potter Story”

I’m a huge fan of Erin Hahn’s books, & last week I reread MORE THAN MAYBE (my fave) and dived into NEVER SAW YOU COMING. This book follows Vada’s best friend, Meg, who is reeling after finding out that her dad isn’t her biological father after all and decides to change her gap year plans by going to Northern Michigan to connect with her biological father’s family. While there, Meg connects with Micah, who is dealing with his own family struggles as his former pastor father has been in prison for the past few years.
Smiling because even though it’s pale girl winter, my Rachel Lynn Solomon book stack has grown with WEATHER GIRL (and will grow in a few weeks when my ARC of SEE YOU YESTERDAY!). I loved Rachel’s adult contemporary debut, THE EX TALK, last year so cannot wait to dive into WEATHER GIRL ASAP!
when you scroll through your photos & realize you never posted one of your favorite books of 2021 🤦🏻‍♀️
I’m back to school this week, but I’m hoping to take some time to unwind each day and start getting a head start on my most anticipated YA books of 2022. I plan on making my first YA read of the year ALL THE RIGHT REASONS by Bethany Mangle (release date: Feb.15th) and hopefully get my library copy of WHEN YOU GET THE CHANCE by Emma Lord this week!
2021 was the year of reaching for books I was 110% invested in reading - I found myself reading more than ever before, reading a total of 162 books and 3 novellas in 2021. My absolute FAVORITE book of the year was a tie between THE LOVE HYPOTHESIS by Ali Hazelwood and PEOPLE WE MEET ON VACATION by Emily Henry! 📚 Q: what was your favorite book of 2021?
*decides to take 2021 wrap up photos on NYE in front of bedroom door and Instagram deleting this post & having to post a second time around is my end of 2021 mood*