Summary: (From the publisher) It’s 2002, a year after 9/11. It’s an extremely turbulent time politically, but especially so for someone like Shirin, a sixteen-year-old Muslim girl who’s tired of being stereotyped.

Shirin is never surprised by how horrible people can be. She’s tired of the rude stares, the degrading comments—even the physical violence—she endures as a result of her race, her religion, and the hijab she wears every day. So she’s built up protective walls and refuses to let anyone close enough to hurt her. Instead, she drowns her frustrations in music and spends her afternoons break-dancing with her brother.

But then she meets Ocean James. He’s the first person in forever who really seems to want to get to know Shirin. It terrifies her—they seem to come from two irreconcilable worlds—and Shirin has had her guard up for so long that she’s not sure she’ll ever be able to let it down. (less)

As a contemporary reads kind of a girl, Tahereh Mafi’s A Very Large Expanse of Sea caught my attention for its unique and untold story in YA. I was even more excited to read A Very Large Expanse of Sea when I found that this was Tahereh Mafi’s first contemporary AND semi autobiographical book. It also received amazing blurbs from so many YA queens, including Marie Lu!

A Very Large Expanse of Sea completely delivered when it came to its beautiful, writing style. I was hooked from the beginning, and among Tahereh’s engrossing writing is her brutally honest protagonist, Shirin. Shirin is such a strong, and yes, stubborn, main character, but I loved how she stuck to her personal beliefs and didn’t let others affect her appearance. Being a Muslim teen in 2002 America certainly isn’t easy for Shirin, and while she wasn’t the best at letting people in, I respect her for not letting her peers and teachers’ comments get to her for the most part.

Speaking of, many thanks to Tahereh’s again beautiful writing style, but it was so heartbreaking to see how cruelly Shirin was treated in school. I loved Navid for many reasons, and while the siblings reside on different steps on the social ladder, it was nice to see how much Navid and his friends supported Shirin. Also, does A Very Large Expanse of Sea mean we’re going to get more YA books with breakdancing?? I think we’ve established long ago that I am quite the uncoordinated reader (but surprisingly/unspringingly good at holding ALL the books), but breakdancing sounds so cool! 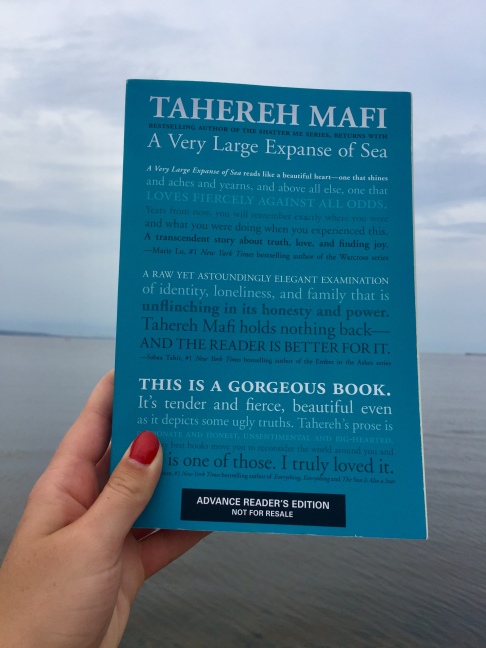 However, even though A Very Large Expanse of Sea’s premise promises some kind of romance, I didn’t realize how much of the book would focus on Shirin’s relationship with the sweetest biology partner ever, Ocean. And yes, my mind still can’t get over the connection between his name and the book’s title.

I didn’t mind Ocean and Shirin’s relationship, and I think Tahereh really displayed the tension caused by a Muslim teen and white, golden boy dating post 9/11. Again, I was shocked by people’s cruelty, which made me sympathize with Shirin’s fears even more. However, I do wish we did get to spend more time learning about Shirin’s family and her culture instead of the romance. I understand that their relationship shows how people’s perception of Shirin makes it difficult for her to carry out a “normal” life as a teenager, but I was more interested in learning about her family and well, Shirin!

One thing I definitely loved about Ocean and Shirin’s relationship? AOL/AIM! I didn’t get on the AIM bandwagon until near the end of its era, but what a throwback!

Overall, I really enjoyed A Very Large Expanse Sea for its unique and honest main character and story. I would love to see Tahereh venture further into contemporary!

I received this advance reading copy in exchange for an honest review. By no means did this affect my thoughts & opinions.

Is A Very Large Expanse of Sea on your TBR? Share in the comments!

3 thoughts on “Review: A Very Large Expanse of Sea by Tahereh Mafi”

starting off this Monday sharing a few books I’m currently reading & read over the weekend! As you can see the glare coming off my library copy of COOL FOR THE SUMMER & a few stickers on the other books, shout out to @margotmwood & her IG about library books & normalizing featuring library books in #bookstagram photos - at least 50% of my annual reading comes from library & was likely way more in my early blogging days before I was sent books by publishers.
Green book stack inspired by Sandhya Menon’s OF PRINCES & PROMISES. I love Sandhya Menon’s YA contemporaries so much, so I’m excited to try her YA contemporary meets fairytale retelling series. This second book in the St. Rosetta series is a The Frog Prince retelling! Thank you to @simonteen for sending this one my way!
I am SO happy it’s summer reading season, but I fortunately read so many great books this spring! I of course had to give another spotlight to one of my fave YA books of the year that just came out this week, WE CAN’T KEEP MEETING LIKE THIS by @rlynn_solomon . I shared more books on the blog yesterday, but these were some of my fave books reads that I own (in order from top to bottom of the stack)
Embracing the fact that I picked up some books from the library, am in desperate need of a haircut, & taking bookstagram photos and making tik toks instead of working on a lit review for my last grad class
happy Sunday & Mother’s Day to those celebrating! In between blog & school things today (& taking blog photos embracing the messy hair life), I’m #currentlyreading ACCIDENTALLY ENGAGED by Farah Heron! I’m loving this contemporary romance following Reena, whose been set up by her parents with another Muslin man, Nadim..except this time, Reena is actually catching feelings while also pretending to be fake fiancés for a cooking competition. What are you reading today?
One of my favorite YA books of 2021 just came out yesterday - Lynn Painter’s BETTER THAN THE MOVIES! If you’re in need of a book that ties in classic rom-coms (Bridget Jones, anyone?) and adorable YA romance, then this is the book for you. BETTER THAN THE MOVIES follows high school senior and rom-com movie mega fan,Liz, who teams up with her enemy /neighbor Wes to score her childhood crush, Michael, as her prom date. This book was just so sweet and funny while still packing in so much depth. I highly recommend putting BETTER THAN THE MOVIES in your beach or pool bag this summer. My full review is up today on Fangirl Fury. Thank you to @simonteen for sending this one my way!