Summary: Sadie hasn’t had an easy life. The now nineteen-year old basically grew up on her own, and she’s been raising her young sister Mattie in their isolated town. At least Sadie has her impenetrable bond with her sister to hold on to. Until Mattie is found dead. After a not-so successful police investigation, Sadie is even more determined to bring her sister’s killer to justice and heads off on a road trip with a handful of clues.When radio personality West McCray overhears Sadie’s story, he becomes obsessed with the now missing girl. He creates his own podcast tracking Sadie’s journey, hoping it isn’t too late.

Thrillers have slowly, but surely become one of my favorite genres. This new love of mine for the genre is many thanks to Courtney Summer’s upcoming Sadie. Fans of Mindy McGinnis’s The Female of the Species will enjoy this thriller, whose title character will stop at nothing to get justice for her sister- and herself.

Sadie is split between the fictitious The Girls podcast led by West McCray and Sadie’s perspective. I really liked both perspectives, but I especially liked following West McCray’s side of cast through the podcast and findings. I kept rooting for him to pick up Sadie’s whereabouts faster, but I’ll let you find out if he succeeds by the end. While I read a physical copy, I think Sadie would make for a great audiobook. You can also experience part of this haunting story through an actual The Girls produced by Macmillan here. No matter the perspective, this book is filled with suspense and darkness. 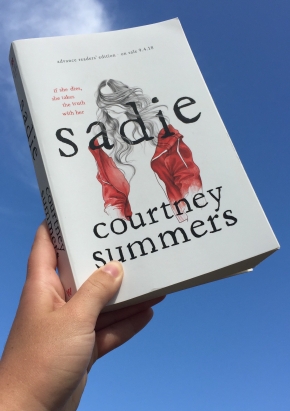 As the title of the book may suggest, this book is far more about Sadie that I even would have imagined. Sadie’s hunt obviously serves purpose for avenging her sister’s death, but I’d argue even more so for the pain and downright horrible things Sadie experienced in her past. While heart breaking, I liked seeing her story open up more and more through her stream of consciousness and the plot.

While Sadie is a 5 star read for me, it wasn’t completely perfect. I sometimes didn’t see Mattie having the same love for Sadie that the book’s premise sort’ve promises, or even as May Beth implies. However, I think my feeling largely has to do with the fact that we don’t get Mattie’s perspective and maybe Courtney Summers is suggesting through May Beth, we’ll never know what really happened in the family’s home- and I’m not just talking about Mattie and Sadie’s relationship unfortunately.

Overall, I loved Sadie for its fast-paced story, complex characters and unique podcast format.Sadie is truly one of those books that you cannot put down until the very end.I’m really interested in picking up more of Courtney Summers’s books.

This review is based on an advance readers’ edition sent by the publisher. This did not affect my thoughts or opinions.

Is Sadie on your TBR? What are some of your favorite thrillers? Share in the comments!