Summary: Addie is visiting Ireland for her aunt’s over-the-top destination wedding and hoping that she can leave the heartbreak she left behind in Seattle for good. But her brother, Ian, won’t let her forget about it, and a fight between the once-inseparable siblings becomes the highlight of their aunt’s wedding. Addie can’t wait even more to escape to Italy to see her best friend, Lina, even if it means that she won’t be able to follow an unusual guidebook, Ireland for the Heartbroken. Instead of getting to escape her brother’s criticism and taste gelato, however, travel plans change. Suddenly Addie finds herself trekking the Emerald Isle with Ian and his admittedly cute Irish friend, Rowan, Ireland for the Heartbroken in tow. 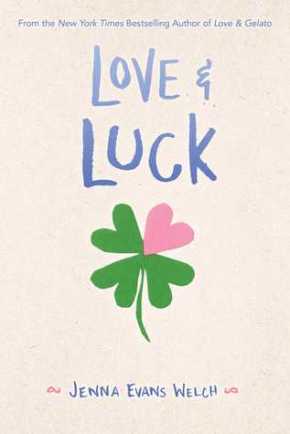 After finishing and really enjoying Jenna Evans Welch’s Love & Gelato, I immediately picked up its sequel/companion, Love & Luck. I’ve been getting back into the binge-reading/almost binge-reading spirit this summer, so it was fun to read Love & Gelato and Love & Luck close together (they were only two books apart for me!).

Love & Luck follows Lina’s best friend, Addie, and her mini vacation to Ireland for her aunt’s wedding. Addie plans to fly to Italy with her brother right after the wedding to see Lina, but as one may expect in a fun, travel-inspired contemporary, things don’t go exactly to plan.

Like Love & Gelato, romance is not the main point in Love & Luck. Love & Luck even has less romance to the former book, but I again really appreciated the focus on family. Addie is practically best friends (not excluding Lina, of course) with her older brother, Ian, but Addie’s relationship with a guy on Ian’s football team has put a strain of their relationship. I often find that in many YA contemporaries that the first three or fours chapters are all about meeting the main characters and setting the scene, but Jenna Evans Welch jumps straight to action from the beginning of the book. I liked this for being different, however, it was too abrupt for the start. Could we get some wedding prep or some building animosity before heading right to the mud?

Addie was a really strong main character, and the book is really about her rebuilding her confidence and her relationship with her brother. And what better place to do it than Ireland?? I haven’t read too many books with Ireland as the setting, and it was fun getting to learn about the Emerald Isle alongside Addie, Ian and Rowan. Again like Love & Luck, Jenna’s research into the history and touristy & non-touristy destinations is evident. We also get a bit more history from the excerpts from the fictional Ireland for the Heartbroken, which guides some of Addie’s healing. The guidebook sort’ve acts in the same way as the journal in Love & Gelato.

Like I said above, a blossoming romance is not the main focus. I liked having Rowan not only for his support of Ian and Addie, but also in the sense that just because he was a cute (the glasses!!), single did not mean him and Addie had to have sparks fly. In regards to Addie’s past romance, I wish we knew what had exactly happened sooner. I liked Addie’s pre-Ireland flashbacks for focusing on her relationship with Ian, but I wish she put out what had happened with Cubby earlier.

I’m really interested to see what Jenna Evans Welch has in store. I could potentially see a sequel to Love & Gelato or another book featuring both Lina and Addie’s perspectives. Jenna has hinted on Goodreads that there is indeed a third book in the works!

Have you read Love & Gelato or Love & Luck? Share in the comments!