On Friday, I attended a pretty epic (the epic jokes will should stop eventually) book event, the first ever Epic Reads Day. Epic Reads, HarperCollin’s YA community, opened up their offices for us readers for a day filled with panels, authors, and books. As I’m sure you’ll discover as I continue, I’m so thankful I got to attend this event, especially since it sold out not even a day after I bought my ticket.

egistration started at 10 AM, where you were welcomed with your very own *book shimmy* t-shirt and you could sign up to participate in one of Epic Read’s video. After, you were directed into their conference room, where most of the day’s events would take place, with a bag filled with books and bookish goodies at your seat. The books inside the bag (or at least mine) were: Seawitch by Sarah Henning (a finished copy which didn’t even come out yet), American Street and Pride (ARC) by Ibi Zoboi Three Dark Crowns and Queens of Fennbirn by Kendare Blake, The Upside of Unrequited by Becky Albertalli, They Both Die at the End by Adam Silvera, and AN ARC OF BECKY AND ADAM’S WHAT IF IT’S US! I didn’t manage to get What If It’s Us at Book Expo and Book Con, so I thanked all the book shimmy gods once I saw it in my bag. The bag also included an Epic Reads pop socket, book nerd question cards, and pins for Angie Thomas’s The Hate U Give and On the Come Up.

The day kicked off with a welcome session from Team Epic Reads. They talked about some of their most anticipated releases, including one of my own, When We Caught Fire by Anna Godbersen. The Luxe and the Bright Young Things series were some of my first YA books and I loved them so much, so you better believe I am more than ready for When We Caught Fire. After some bookish questions from the audience (I said that Second Chance Summer was an ugly-cry worthy read) , the first author discussion began between Ibi Zoboi and her editor, Alessandra Balzer. While I haven’t read Pride and Prejudice, I am so excited to jump into Pride, and it was fun hearing Ibi talk about her writing process and the book itself. We then moved on to lunch, but before I ate, I participated in an Epic Reads video. I chose to do a book talk, where I was asked to talk about my favorite book and why I love reading YA. While waiting to film, Jane, the Team Epic Reads member who talked about When We Caught Fire, showed me a copy of The Luxe with its new cover design. I’ll give you some insider info and say that I talked about To All the Boys I’ve Loved Before in my video. Did anyone really expect anything else? 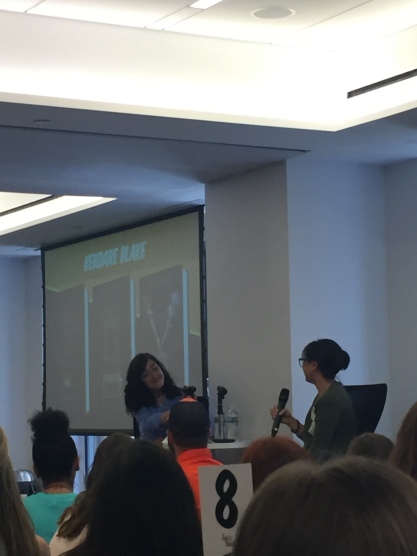 After lunch, two members of Team Epic Reads who work in the design department walked us through their cover-making process. We got a behind-the-scenes look of the covers of Pride and Julie Murphy’s Dumplin’. It was cool to see how much 3D-design work went into Pride and how MANY (amazing) cover designs there were for Dumplin’. We then moved on to our next author discussion with Kendare Blake and BookTuber Emma Giordano. All three authors discussions were filled with laughter, but Kendare Blake is easily one of the most funny, sassy authors I’ve ever met. She often referred to her morbid sense of things, but it was so funny to hear the stories behind her research and honestly daily happenings! One of my best bookish friends IRL has begged me to read Three Dark Crowns and after hearing Kendare speak, I need to immediately! During the Q&A, I asked her about her favorite YA fantasies, which included The Boneless Mercies by April Genevieve Tucholke and Laini Taylor’s Strange the Dreamer. Emma and Kendare then moved on to a game of Rip It or Ship It. 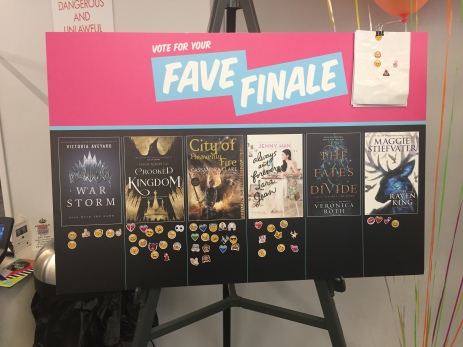 Rip It or Ship it was followed by a quick break featuring Dō cookie dough and a panel from Team Epic Reads about their experiences in publishing. It was really awesome to hear how they each got their start, and they gave out great advice about how to get into the publishing industry. Their panel then led to the last author discussion of the day featuring Becky Albertalli and Adam Silvera. Like Kendare Blake, Becky and Adam’s discussion was filled with humor and it was really fun to hear about their process of writing a book together. Everyone was cracking up throughout, from Becky talking about stepping on Nick Robinson’s toe when she first met him to Adam saying that Becky has written 3.5 books during their BFF Challenge.

The day ended with a signing from all four authors, and after the signing, it was time to book shimmy home. Overall, Epic Reads Day was such a great day and it was one of the smoothest book events I’ve ever attended. I hope Epic Reads continues to hold this event.

Did you attend Epic Reads Day? What are some of your favorite Epic Reads books? Share in the comments!

14 thoughts on “IT WAS EPIC: My Experience at Epic Reads Day”

sunday wisdom courtesy of @booktowne ✨📚 spent yesterday in manasquan with friends so of course had to stop in this local indie
Thank you so much to @simonteen for sending me an advance copy of Marisa Kanter’s upcoming YA contemporary, AS IF ON CUE! You probably know that I loved her debut last year, WHAT I LIKE ABOUT YOU, so I cannot wait to dive into this enemies-to-lovers story following 2 high school rivals who are forced to write & direct the school musical together. AS IF ON CUE comes out on September 21st, & if you’re interested in more books coming out this year, I just did the Ancipated Releasea Book Tag on the blog.
I’m #currentlyreading one of my most anticipated summer releases, ISN’T IT BROMANTIC? by @lyssakayadams . I love, LOVE the Bromance Book Club series & I’ve been waiting for Vlad’s story since we first met him in the first book!
I’m #currentlyreading THE KINDRED SPIRITS SUPPER CLUB by @aereichert ! I’m loving this one andddd this urban outfitters sweatshirt I bought last week (excuse my non photogenic energy/outtakes while taking this bookstagram)
starting my weekend with my reread of CARRY ON by Rainbow Rowell… and yes I do have three copies of the first book - I bought the original hardcover when the book was first released, a friend gifted me a signed hardcover edition (& then I swapped the cover with the new Kevin Wanda illustration sent to me by @wednesdaybooks ), and I bought a paperback copy when I went to Rainbow’s signing at Book Con 2017. I have a few duplicates of some books, usually my favorites like FANGIRL & TO ALL THE BOYS I’VE LOVED BEFORE and when I have both the ARC and finished copy of a few books (I tend to keep both if the book is a favorite).
My first read in July was INDESTRUCTIBLE OBJECT by Mary McCoy. I’ve definitely been reading more contemporary romances than YA contemporary this year, but this book reminded me why I love YA so much. The book follows recent high school grad Lee as her world begins to fall apart with the separation of her parents & her boyfriend/podcast co-host breaking up with her. Lee turns to podcasting with a family friend and new crush to figure out what caused her parents’ separation and discovers so much more. This book features so much diversity surrounding gender & sexuality, & I plan on having my full review shared on the blog this month. Thank you to @simonteen for sending this one my way!