Now that it’s summer, I spend most Friday mornings waking up around nine o’clock, a book or two within reach. Last Friday, however, was a bit different, as I was making my way into the Javits Center for the last day of my first Book Expo.

I considered making my first stop of the day at Little Brown for an ARC drop of Dear Evan Hansen, but I figured since I wasn’t one of the first on the show floor, I wouldn’t be able to grab a copy. Instead, I went to Scholastic, where I was able to pick up their 20th Anniversary Harry Potter tote bag.  I did make my way to Little Brown to witness the mob pit for Dear Evan Hansen, where I decided that I liked my arms and legs enough to just wait for the book to come out in October. But never fear, because my first stampede of the day wasn’t too far away…

I ended up staying at Little Brown, where I met up with Mikayla from The Book Insturments and lined up for a swag giveaway for Laini Taylor’s Muse of Nightmares and Holly Black’s The Wicked King. There was a lot of confusion over if the books were being dropped there, and a few of Hachette employees had to clear up that this was not a book drop. Luckily for Mikalya, a few other bloggers, and I, one of Hachette’s employees revealed that yes, none of the books were available then, but there was going to be a secret password giveaway for The Wicked King around 10 AM. We decided to linger around the booth to see if he held correct, and while we waited, I picked up People Kill People by Ellen Hopkins.

And sure enough at 10 AM, the NOVL revealed the password to receive The Wicked King. Over 100 people stormed the booth, pushing in full force (at one point, I think I grabbed on to someone’s backpack just so I could stay upright), and after being told to form a single line, I ended getting a copy of the book that remained hidden in my bag for the rest of the day.

After The Wicked King madness, I made a few smaller stops before my longer waits of the day. I went to Fierce Reads and picked up Unclaimable Baggage by Jen Doll, Owlcrate, where I won Anna and the French Kiss-inspired tea, and Bloomsbury, where I received The Girl King by Mimi Yu. I then went to Adele Griffin’s signing for Tell Me No Lies, and after I took a break to grab lunch.

I ended up bringing my lunch (I highly recommend trying the make-your-own salad station) to the Autographing Area, where I got in line for Tahereh Mafi’s A Very Large Expanse of Sea. Tahereh’s signing wasn’t until 1:30, but the line starting forming around 12. While waiting for over an hour and half for a book may sound like a while, I read Emergency Contact by Mary H.K. Choi and hung out with Cait from caitsbooks. Cait had her dog, Laia, there, who quickly became the unofficial mascot of Book Expo. Soon later, I met Tahereh Mafi, and while I’ve never had a bad author experience, Tahereh is easily one of the sweetest authors I’ve ever met. I told her that one of my friends was a huge fan of her books and she told me to tell them that she said hi. I’m so excited to read her first contemporary and semi-autobiographical novel! 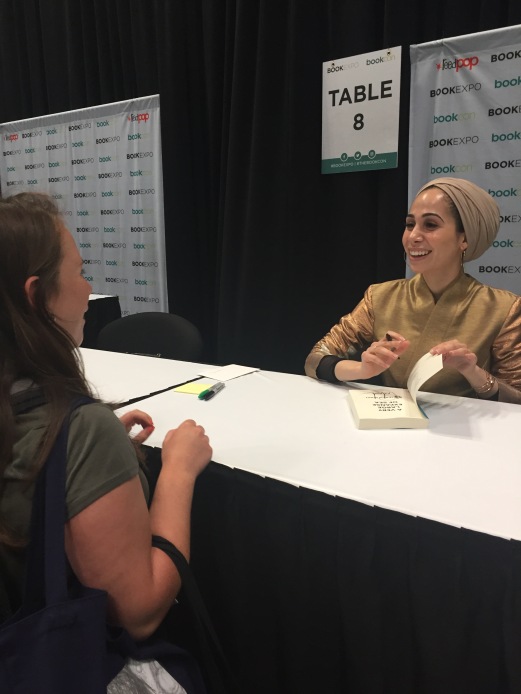 After Tahereh, I joined my longest wait of Book Expo for Laini Taylor’s Muse of Nightmares. Yes, I have yet to read Strange the Dreamer, but it’s one of my best friend’s favorite books and based on everyone’s feedback, I know I’m going to love it. After missing a surprise drop for it and knowing that it wouldn’t be available at Book Con, I figured the wait was worth it. While waiting, I again met up with Cait and we took turns leaving the line while holding our spots to run to the show floor. During my bathroom break, I grabbed Imprison the Sky by A.C. Gaughen and Grace & Fury by Tracy Banghart.

After waiting in line for two hours, Laini’s signing started at 4, but I didn’t get to meet her until about 4:30. Right when Book Expo tickets became available, people were given the opportunity to buy an Avid Reader Pass. Imagine a Disney Fast Pass, but for Book Expo. This pass allowed people to pick one signing where they could jump to the front of the line, and since there weren’t a ton of opportunities to get Muse of Nightmares, at least thirty people saved their pass for Laini’s signing. If Book Expo is still going to offer the Avid Reader Pass, one of my suggestions for the future is that people with Avid Reader Passes need to be at the signing at least fifteen minutes early. It was a bit frustrating to see person after person just casually come up to the front of the line, even twenty minutes after the signing had already started. While my spot in line (I was the tenth, not including avid reader people) “guaranteed” me a book, I felt bad for the people near the end of the line, who had to be told that there may not be enough copies available for them after generally waiting for so long.

The wait was worth it because Laini was just so sweet! I told her that Strange the Dreamer was my friend’s all-time favorite book and that my copy of Muse of Nightmares would have a special place in our dorm next year. Before heading out for the day, I made a final stop at Book Beau, where I picked up my first sleeve from Book Beau. I opted for the XL size so it could hold any of my books, and I was immediately impressed by its quality the minute I picked it up! I chose Bon Voyage since it screamed summer.

I had the best time attending Book Expo this year, and I am grateful for the 25 books that I hauled home over the two days!

My full haul for Book Expo and Book Con can be found here, while you can read about my Thursday experience at Book Expo here.

Did you attend Book Expo? If you could meet one author, who would it be? Share in the comments!