Summary:
In the year 2045, reality is an ugly place. The only time teenage Wade Watts really feels alive is when he’s jacked into the virtual utopia known as the OASIS. Wade’s devoted his life to studying the puzzles hidden within this world’s digital confines—puzzles that are based on their creator’s obsession with the pop culture of decades past and that promise massive power and fortune to whoever can unlock them.
But when Wade stumbles upon the first clue, he finds himself beset by players willing to kill to take this ultimate prize. The race is on, and if Wade’s going to survive, he’ll have to win—and confront the real world he’s always been so desperate to escape. 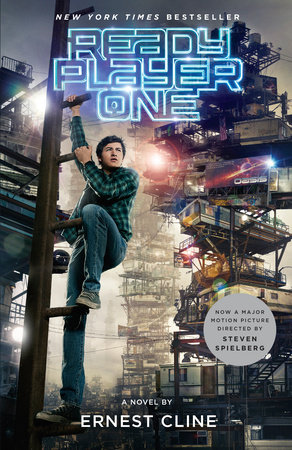 Ernest Cline’s Ready Player One is a much-loved book among my fellow readers and reviewers that I knew would one day pop into my own reading. The book earned a priority spot on my TBR when I saw a trailer for its film adaptation and after finishing, Ready Player One has become one of my most anticipated film releases of 2018.

Ready Player One takes place in a world and virtual reality immersed in video games and sci-fi & fantasy content. While a lot of the games and films are from the ‘80s (reminder that I must watch every John Hughes film now), I was reminded of my own video game experience. I really enjoy playing video games, and by video games, I basically mean Nintendo. I grew up playing GameCube and Sony’s PlayStation 2, and the Wii continues to be my favorite console. My favorite way to play Animal Crossing is on my DS (let’s take a moment of silence for the disappointment that was Animal Crossing for iPhone).

Returning to Ready Player One, I loved the separation between the real world Wade lives in and the virtual world set within the OASIS—the world building overall was phenomenal! The book physically takes place in a near-future United States destroyed by energy/fuel consumption and basically any non-Earth saving ways you could imagine. I really liked learning about this society and how much the way of life is influenced by the OASIS. The OASIS is an even more mind-blowing, with all of the different worlds set inside. I think it’s safe to say many of us would be spending our days in a virtual stimulation of Hogwarts! I also loved learning about the creators of the OASIS, Og and Halliday, and seeing all of the pop cultural references.

I liked when Wade and his avatar, Parzival, team up with his friends and fellow gunters (people who make it their mission to find James Halliday’s egg) for their quest, and it was just really fun seeing them talk and play games. Art3mis was definitely my favorite “secondary” character—I loved how she was a blogger and that she could solve Halliday’s clues just as well as Wade. However, I was a bit frustrated when Wade or Art3mis magically came up with the solution to one of Halliday’s clues. Obviously, we would be reading Ready Player One all day if Ernest Cline had given us their entire thought process, but sometime it felt too easy, even for experts. I also had trouble visualizing some of the action scenes, which may have resulted from my own unfamiliarity with most of the games.

Lately, there has been a ton of hype over Ernest Cline’s confirmation that a sequel to Ready Player One is in the works. While I think the novel works really well as a standalone, I wouldn’t mind seeing Art3mis and Wade’s relationship develop and I’m curious about the future of IOI. I would even love to just have a novella to see what the winner of the Hunt (no spoilers for you!) does with their winnings.

Overall, I highly recommend reading Ready Player One if you’re looking for a unique dystopian read or if you have a love for video games and all the sci-fi things! I am more than excited to see Ready Player One in theaters when it comes out on March 29.

I received Ready Player One from Blogging for Books for this review.

Have you read Ready Player One? Are you looking forward to the movie? Share in the comments!

One thought on “I’m Ready to Play More Than the Wii: Ready Player One Review”