As I was preparing my traditional What I Read post for February, I realized that I did a few more bookish, fandom, and bloggish things that I want to talk about! Because I don’t just want to discuss books today, I’m going to be guiding you through what I wrote and watched this month, as well as some fun, in-real-life happenings.

February was a weird reading month because I feel like I didn’t read a lot, between school life and being busy on the weekends, but I managed to read 7 books! I tend to read less during the school year because I like not having to concentrate too much when I get to relax (hence a lot of Youtube and TV watching). I spent a lot of time reading for my English classes this month (2 books from my contemporary American lit class are included down below), and while I’m not including them on my list, I read Logicomix and Berlin: City of Stones Vol.1 for my graphic novels course.

If I don’t talk about the books below right now, it’s because you’ll find reviews for them in the next section.

The Bear and the Nightingale by Katherine Arden | 4.5/5 Stars

This Is What Happy Looks Like by Jennifer E. Smith | 4/5 Stars

Her Body and Other Parties is the second book I’ve read for my contemporary American lit class, and it was a book that was on my TBR radar before I found out it was on the syllabus!?! I’m still slightly in shock that I’m reading books published within the past year in SCHOOL (not-so-patiently waiting for my school to add a YA lit class). Anyways, I really enjoyed Her Body and Other Parties for its genre-bending short stories and focus on women. My favorites include “Inventory”, “Eight Bites”, and “The Resident” (all of which you can find online!).

After the Quake by Haruki Murakami | 4/5 Stars

My contemporary American literature class is focused on the short story cycle, and it’s been really interesting to read so many short stories. I’ve heard good things about Haruki Murakami’s 1Q84, so I was excited to pick up this short story collection centering around the Kobe earthquake. When I’m reading for school, I often take the time to take notes as  I read, but I was so immersed in Murakami’s writing that I forgot to until I finished! My favorite stories were “ufo in kushiro” and “thailand”.

My reread review of HoF will be coming next week, just know for now that I was very happy to be reunited with Manon & Abraxos.

Like my reading, I feel like I didn’t post as much as I have in the past six months, but I only had two weeks where I went back to my original schedule of only 3 posts a week. I’m really happy with February’s content.

The HYPE IS REAL: Scythe by Neal Shusterman

The Review That Time Forgot… Okay, It Was Me: I Am Not Your Perfect Mexican Daughter by Erika L. Sánchez

Before the Fae: Throne of Glass and Crown of Midnight Reread Discussion

The Upside of Unrequited by Becky Albertalli

Keeping Up With Fantasy: The Bear and the Nightingale & The Cruel Prince

I READ A SUMMER CONTEMPORARY IN FEBRUARY??? | This Is What Happy Looks Like by Jennifer E. Smith

CAN THE THUNDERHEAD GIVE ME THE 3RD BOOK? | Thunderhead by Neal Shusterman

The Greatest Showman– I’m about two months late to the party, but during the first weekend in February, my sister and I finally saw The Greatest Showman. In January, I saw so many people online completely raving about this musical-film inspired by P.T. Barnum (a sentence I thought I’d never write), and it was Zoë Sugg of Zoella and her vlogs that made me want to see the film. It’s safe to say that I absolutely loved The Greatest Showman, and I have been completely obsessed with the soundtrack. I run to “A Million Dreams” and “The Other Side” , guys. Besides the two songs that I just mentioned, I love “Never Enough”, “Rewrite the Stars”, “From Now On”, and “Tightrope”.

The Good Place – Almost every book blogger I follow on Twitter have raved about The Good Place. What really sold was me were all the mentions of PARKS & REC EASTER EGGS!

It was so much fun to be back in a Michael Schur show— HE CREATED Parks & Rec- and I just love how complex the storyline has become, not to mention the hilarious characters. As I’m writing this post, I’ve just started watching Ghosted again because you know, Adam Scott (Ben Wyatt is forever my fictional bf), WHO IS ACTUALLY IN SEASON ONE OF THE GOOD PLACE. I cannot wait for the third season to come out, and until then, I might need to watch another Michael Schur show (I’m thinking Brooklyn-Nine-Nine) or it’ll be time for another Parks and Rec rewatch.

The Belles Book Signing- During the second weekend in February, I went into New York City to spend the day with one of my best friends. We spent most of the day catching up and working on a film project of his-while writing will always be #1, my love for video has expanded this year with my film classes—and around 3:30, we decided to do something bookish and head to Books of Wonder for Dhonielle Clayton and Adam Silvera’s event for The Belles. Our first mistake was leaving about twenty minutes before the event, as the signing turned out to be the most crowded event I’ve been to. Our second “mistake” was continuing to take our time and then end up at the downtown Books of Wonder.The event was of course held at the uptown Books of Wonder location, so a few subway stops later we made it there. Luckily, we made it in time to hear Dhonielle and Adam answer questions from the audience and treat ourselves to some macaroons. I also convinced my friend to buy History Is All You Left Me, which is my favorite book of Adam’s, but unfortunately we didn’t say for the signing because there were about 70 people in front of us and I had a train to catch. However, I still had a great day in the city with my best friend and those macaroons were the perfect snack for the train ride home. 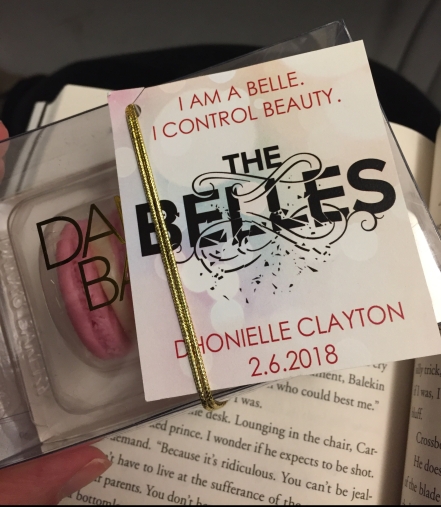 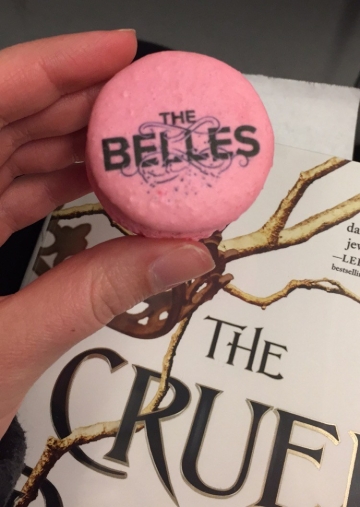 Being featured on Jacquelyn Middleton’s blog

Jacquelyn Middleton is the author of London Belongs to Me, one of my favorite NA reads, and London, Can You Meet. On her blog, Jacquelyn has been sharing so many bookstagram photos of her books and mine was featured in her post, “London Belongs… To You: Part Twelve“! I consider myself to be a VERY amateur bookstagrammer, so it was amazing to be featured along such amazing bookstagram accounts– I think one of my summer projects is going to be upping my Instagram game.

I mentioned this in my Funko Pop Collection post, but on Valentine’s Day, I bought my blog domain! While I didn’t post until March, I created Fangirl Fury in February of 2017, and I feel so excited to own my domain a year later. You can now officially find me at fangirlfury.com. Whether this is your 1st or 150th time reading a Fangirl Fury post, I want to thank you for supporting my spot on the Internet. Here’s to another exciting year of blogging, reading, and fangirling!

I really liked writing a true monthly wrap-up, and I can see myself expanding my “What I Read” posts to this format.

Do you like monthly wrap-ups? What did you read or watch in February? Share in the comments!