I’ve  been reading true to the season this January and February with plenty of fantasy, and I’ve been absolutely loving it! I read a lot of contemporary in 2017, so I really want to spend time in 2018 catching up on some backlist titles and ALL of the amazing releases in the fantasy world coming out this year. Today, I’ll be giving you mini reviews of The Bear and the Nightingale by Katherine Arden and The Cruel Prince by Holly Black.

The Bear and the Nightingale by Katherine Arden

I never realized that I needed Russian-inspired fantasy until I read The Bear and the Nightingale, the first book in the Winternight trilogy. This book has been on my radar since New York City Comic Con in October (I think the publisher was giving out paperback copies), and it’s been described to me as the perfect winter read, which I can now say is true! The Bear and the Nightingale follows a family who lives in a village on the edge of the Russian wilderness, where folklore and spirits are part of the way of life. After her mother dies, Vasilisa is left to figure out life and her secret powers on her own. Her father’s new wife does not help matters by forbidding that Visalia and her siblings honor the household spirits.

While the story primarily focuses on Vasilisa, we get plenty of third person POV from almost the entire cast of characters. I love her brothers, Sasha and Alyosha, and I like how Vasilisa’s stepsister, Irina, is not pited against her. My favorite aspect of the book is definitely a tie between Katherine Arden’s writing style and her world building! I love how she incorporated Russian folklore, culture, and even history, from what I understood, in her own fantastical world.

Regarding the ending, I was pretty content with that there weren’t a million and one questions left open at the end (okay, maybe there were like five). I’m really excited to pick up the The Girl in the Tower, especially since I’ve heard that the book features Vasilisa’s siblings that we don’t get throughout The Bear in the Nightingale!

The Cruel Prince by Holly Black 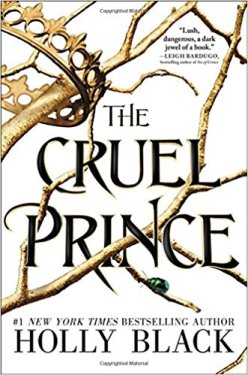 I am here to admit that all the hype surrounding The Cruel Prince made me want to pick up this first installment in Holly Black’s The Folk of the Air trilogy. While I have seen some mixed reviews, so many reviewers that Ifollow have raved about TCP and have placed it among their all-time favorites list. TCP was my introduction to Holly Black, and I’m sure like many, the only Fae-inspired books I’ve read are Sarah J. Maas’s A Court of Thorns and Roses series.

TCP reminded me of Amanda Hocking’s Switched trilogy for its human-enters-fantastical-world element (Switched is about trolls, TCP is about faeries). Despite the hype, I didn’t know too much about the book going in, and I really enjoyed how Holly Black incorporated humans and the mortal world into the story. In the most basic synopsis, The Cruel Prince follows a mortal girl, Jude, who must fight off the trickery of the Fae in order to be in a place of power and respect in their kingdom.

I like how the book starts off with the reason why Jude and her sisters are whisked away from the mortal world to the Faerie realm, then transporting into the future with the girls adjusted to living among faeries. Like I said before, I haven’t read too many faerie books, but Holly Black’s world-building and world of Fae seemed really unique, and I’m definitely interested in seeing the world expand in the next book. My favorite part was learning more about the royal court and seeing what Jude’s role would ultimately be.

While I do think TCP is worthy of the hype, it’s not my all-time favorite book. I feel like Jude quickly escalated to being pretty dark to OH MY GOSH THIS GIRL IS ABOUT TO HAVE ALL FAERIES BOW AT HER FEET against all of the plot development, and I can already see the insta-love/hate-to-love forming. However, I am interested in picking upmore of Holly Black’s work and I plan on reading The Wicked King upon its release date.

Have you read The Cruel Prince or The Bear and the Nightingale? Share in the comments!

7 thoughts on “Keeping Up with Fantasy : The Bear and the Nightingale & The Cruel Prince”