I think we can all agree that Funko Pops make for the best bookshelf companions. J started collecting Funko Pops a few years ago, and I now have 15 Funko Pops in total, along with some other Funko Pop merchandise. Today, I’m going to walk you through my current Funko Pop collection- I may have to do a part 2 as it grows!

Bert Macklin—I remember running and screaming around my house, much to my family’s delight, when it was announced last year that Funko was creating a Parks and Recreation series. Bert was my first Parks and Rec Funko and so far, he’s the only Hot Topic exclusive from the series. I recommend using Hot Topic when ordering Funkos online—they usually have a ton of sales and do a lot of exclusives.

Ron Swanson– I snuck Ron into my textbook order last semester on Amazon, out of fear that I would never find him again. HOW COULD I NOT HAVE RON GUYS? IT’S LIKE LESLIE WITHOUT WAFFLES.

Leslie Knope– Speaking of Leslie, I was gifted Leslie this past Christmas. I love how much detail they put into her Pawnee book!

April Ludgate- April was a surprise Christmas gift and like Leslie, I love how much detail went into her (her eyeshadow game is strong).

Andy Dwyer- Andy was the third Funko I received for Christmas and I’m happy I now own both “Andys”. I don’t plan on finishing the first Parks and Rec series with Lil’ Sebastian—his role in the show is funny, but I think a few other characters should have been more important to include in the first series of pops.

Luna Lovegood- I love how detailed Luna is, between her earrings and the spider on her hand.

Ron Weasley- I couldn’t have Harry without Ron, who was a Christmas present from one of my sisters a few years back. For some reason, he falls over the most.

Draco Malfoy- I remember ordering Draco off Barnes and Noble at the end of last spring semester in spite, after my parents had made a comment about my overflowing shelves and how I should be saving my money and not spending it on “toys”. Luckily, bookcase number 3 saved that dilemma.

Neville Longbottom- I bought Neville from Barnes and Noble before you could buy him from other retailers, so I think #bookhipster is fitting here. 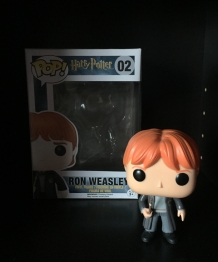 Dumbledore- Dumbledore was another Christmas gift a year or two ago, and my mom picked him out for me because she liked his outfit.

I have four Harrys—Harry Potter in his Hogwarts robes, Harry from Order of the Phoenix, Harry on a Broom, and keychain Harry in his robes. I think my favorite is Harry on a Broom because he is the most unique—he was the San Diego Comic Con Exclusive for 2017 and I remember  my heart racing driving safely to my local Barnes and Noble to pick one up before they sold out.

Hagrid Pen– Until I one day have an entire bookshelf dedicated to my Harry Potter collection, I won’t be adding the 8 inch Hagrid for now. My dad picked this up for me while I was away at school for a cute homecoming gift. 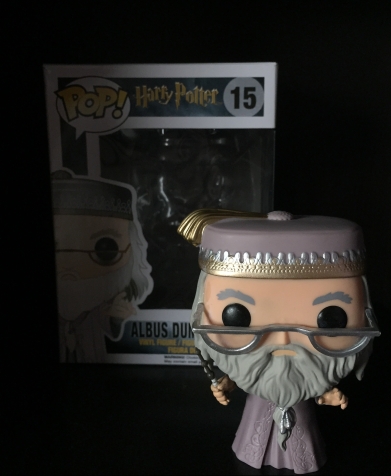 I highly recommend if you collect the Harry Potter Funkos, place them somewhere where they won’t fall . At least for the Funkos from the first two series, I’ve learned that the hard way–I’ve gone through 3 original Harrys and have had to superglue Luna’s wand—that their wands and glasses can easily break. This is why I now keep Harry and Dumbledore in their boxes and have never tried displaying Harry on a Broom outside of his box—for photos I’ve actually had a hard time getting him to sit on the display! 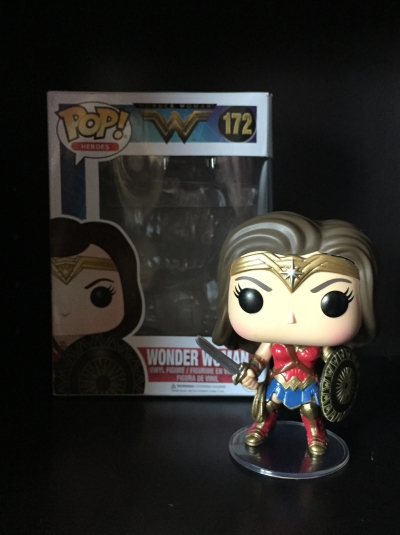 Wonder Woman – I received Wonder Woman as a birthday gift with Bert Macklin and Harry from Order of the Phoenix.

Katniss Everdeen “Girl on Fire”- Katniss was my first ever Funko Pop. I really think this one is unique and I wouldn’t mind adding wedding Katniss and Katniss with her bow and arrow to my collection.

In my eyes, I need a Hermione to complete my Harry Potter collection, and I also would love to add Luna with her Gryffindor hat and Quidditch Ginny Weasley to my collection. I’m also hoping for another series for Parks and Recreation— we still need Tom, Ben, Ann, Chris, Donna, and Jerry/Gerry/Terry. I would also love to see Duke Silver and Janet Snakehole AND OH MY GOSH LESLIE IN HER WEDDING DRESS.

Do you collect Funko Pops? Share  in the comments!

In some unrelated-Funko Pops news, as a Valentine’s Day gift to myself, I bought my blog domain! I’ve been wanting to buy my blog domain for a long time and since I created Fangirl Fury last February (even though I didn’t post until March,oops), it was time to treat my myself. Fangirl Fury can now be officially found at fangirlfury.com! This is such an exciting chapter for me, and whether this is the first blog post of mine you’ve read or you’ve been here throughout my first year, I want to thank you for supporting Fangirl Fury.  Here’s to another year filled with reading & blogging!