Last Saturday, I went to the symphony for the first time in my life. But in Fangirl Fury fashion, of course, this concert was based on one of my all-time favorite literary obsessions: Harry Potter. The New Jersey Symphony Orchestra presented Harry Potter and the Chamber of Secrets In Concert, where the orchestra performed the score of Harry Potter and the Chamber of Secrets while the film played for the audience. I’ve heard nothing but fantastic things about these movies meets orchestra performances, especially for Harry Potter and Lord of the Rings, and once I heard that my school was hosting a trip to the show, I knew I had to attend.

I attended the event with one of my friends from our university’s music appreciation organization, so it was really awesome to connect through our love of Harry Potter. And we prove that Hufflepuffs and Slytherin can be friends! We sat in the second row of the rear mezzanine, and we were clearly able to see the orchestra on stage and of course, the movie screen. The concert in general had such an awesome atmosphere—how could it not be in a room filled with hundreds of Potterheads?? Throughout the show, the audience would cheer when characters first entered the movie (I think Snape and Hermione received the loudest applause), laugh along with scaredy-cat Ronald Weasley, and applaud during pivotal moments. The orchestra was absolutely phenomenal and there were many times where I became so immersed in Chamber of Secrets that I forgot that the music wasn’t being played on the film’s soundtrack. 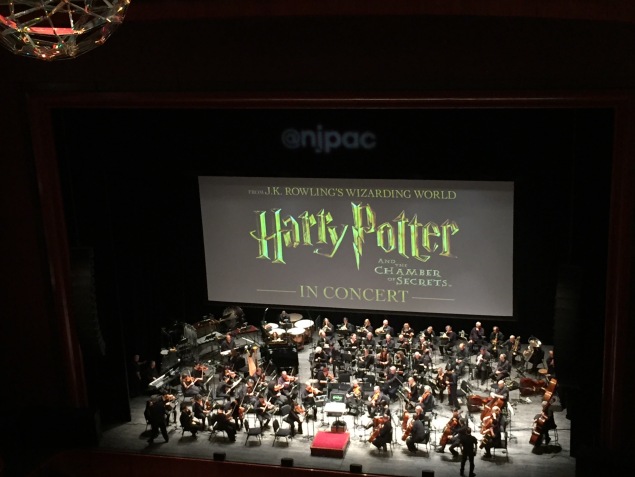 Despite how many times I indulge myself in Harry Potter movie marathons on Freeform, I haven’t watched Chamber of Secrets in full in a long time (I also chalk some of this up to the fact that Freeform definitely plays the last three films the most). It was really fun to go back into Chamber of Secrets and be reintroduced to this chapter in the wizarding world, where we of course meet Dobby and  Gilderoy Lockhart. I also forgot how light this movie is compared to the later films in the series. Ron was so funny and stole the show for me, between his under-the-breath remarks and fear of spiders.

I didn’t buy any merch at the show, although they had some really cute T-shirts that said, “Dobby is a free elf”. I did treat myself to a chocolate frog as a snack, where I received a trading card of Madam Pince inside the pack. This was my second chocolate frog ever (okay, we all know I need to make my way to Universal ASAP), so now I have her card and Professor Sprout from my frog that I bought at the Cursed Child release party. On the way home from the symphony, I fittingly started listening to Carry On by Rainbow Rowell on audiobook.

If you ever have the opportunity to attend a Harry Potter in Concert event, I highly recommend that you do! It was such a cool way to experience the symphony and the music behind the wizarding world of J.K. Rowling.

5 thoughts on “My Experience at Harry Potter in Concert”