Summary: It’s been a year since Makani was forced to move from Hawaii to Nebraska to live with her grandma, but she can’t seem to escape from the past that she left behind there. And life isn’t peachy-keen in Nebraska, either. If there’s two things that are loved by small-town Osborne, it’s corn and football. What’s not so loved? The sudden murders of high school students, leaving everyone in town feeling on edge, even in their own homes. 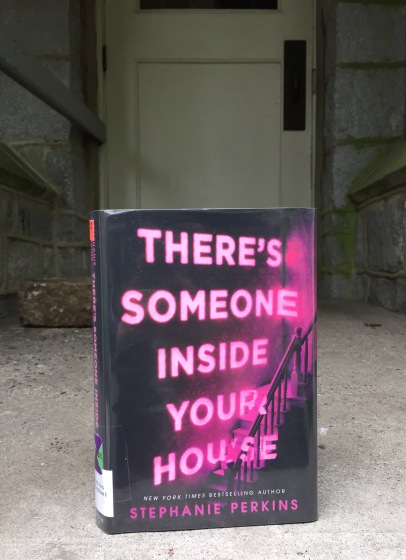 I decided to pick up There’s Someone Inside Your House during October for the sake of getting more invested into the Halloween-themed month. I’m not too big of a horror fan, but being a fan of Stephanie Perkins’s past work, I knew that I needed to read it. I had a feeling that There’s Someone Inside Your House was going to be a good one for me from the get-go because not only is it a Stephanie Perkins book, but the first character we meet is named HALEY! AND IT’S SPELT EXACTLY HOW I SPELL MY NAME! Yes, she’s dead by the end of the first chapter, but still!!

Be warned that There’s Someone Inside Your House is quite gory. The murder scenes often made me gasp and cringe from imagining such a bloody scene—the worst for me was the third murder scene, it made me want to forever protect my ears. There’s Someone Inside Your House really is a bloodier adaptation of Stephanie’s Anna and the French Kiss series, where serial killer terrorizes small town meets cute young-adult romance. I didn’t mind Makani as our main character and I think my favorite character was Grandma Young. I was in constant fear the puzzle-loving and heart-healthy Grandma Young wouldn’t make it. I also liked Ollie as Makani’s love-interest and seeing how his mysterious past would play out. I mean c’mon, how bad could the guy be? He has a dog named Squidward! I think my favorite line in the book was the following gem from Ollie’s brother Chris:

“Suddenly, a yell rang out, followed by a loud crash. Makani gasped and shrank as Ollie clung to her in horror. There was the indistinct sound of things settling to the floor.

I only had a few “disappointments” when it came to There’s Someone Inside Your House. I disliked how long it took for us to find out why Makani really came to Nebraska, and in my opinion, it really wasn’t as bad as she made it out to be. Frankly, it was more of the older girls’ fault than her own. I also felt that the identity of the serial killer was sort’ve thrown at us and we were expected to go along with it. Yes, the characters explain why it makes sense, but we really don’t get to see any of this reasoning play out beforehand.

Obviously, everyone is entitled to his or her own opinion and every book can’t be everyone’s cup of tea, but I don’t understand why There’s Someone Inside Your House is getting relatively low reviews on Goodreads. There’s a super-sweet romance, diversity (Makani is biracial, her friend Darby is trans), there’s horror and gore, and THERE’S A DOG NAMED SQUIDWARD!!!

Have you read There’s Someone Inside Your House? Share in the comments!

3 thoughts on “Review: There’s Someone Inside Your House by Stephanie Perkins”