For today’s Top Five Wednesday, I’ll be talking about what fitness routines I would love to adopt from characters. The topic has made me realize that many of my favorite characters aren’t too into fitness, so I had to be just a bit inventive for this T5W.

Peeta from The Hunger Games by Suzanne Collins- How was Peeta so physically fit to perform during training and the games? He lifted bags of flour at his family’s bakery! If doing Peeta’s fitness routine means that I get to work at a bakery, sign me up! Katniss would enjoy my banana bread, and hopefully Katniss would get Gale to eat it and he would love it and he would want to marry me and we would have a happily ever after better than any dystopian society could imagine.

Starr from The Hate U Give by Angie Thomas– Starr is very committed to playing basketball, and I wish I could have just some of her skills. Between my height and lack of basketball playing skills, I tend to not mix too well with the sport.

Spencer from the Pretty Little Liars series by Sara Shepard– In the books, Spencer plays field hockey, and being a field hockey player myself, I could possibly develop a fitness routine that revolves around the sport (and yes, this is evidence that I have read EVERY single book in the Pretty Little Liars book series, but I couldn’t get past the first season of the show).

Jule from Genuine Fraud by E. Lockhart– It’s pretty impressive that Jule finds time to work out in between traveling from place to place. Her dedication to her fitness routine is something that I need during the summer (what can I say, my bed can be just too controlling in the mornings). I’m going to have a review of E. Lockhart’s Genuine Fraud closer to release date (September 5th) this fall. 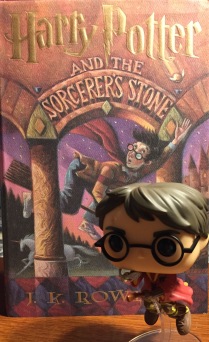 Oliver Wood from Harry Potter– Quidditch as my main form of exercise? Yes please! Oliver’s routine is probably a bit intense, but I’ll do whatever it takes to make me closer to being a Hogwarts student.

Being an athletic person myself, I’d love to read some more books that feature characters who play sports or who are into fitness. Let me know about some books about sports/fitness that come into your mind in the comments!

Top 5 Wednesday is a collaborative group of book bloggers from various platforms who love sharing lists on Wednesdays. The T5W group can be found here on Goodreads.