Being the Hamilton fan that I am, I knew it was time to pick up Melissa de la Cruz’s young-adult novel Alex and Eliza. Alex and Eliza tells the love story of how Alexander Hamilton and Elizabeth Schuyler met. The Revolution isn’t stopping the Schuyler family, one of the wealthiest families in the young nation, from hosting a ball in honor of their daughters. Peggy and Angelica are ready to dance and flirt the night away, but Eliza can’t help thinking how silly it is to be spending time at a ball when there are soldiers who need her. But when General Washington’s right-hand man, Colonel Alexander Hamilton, arrives with some bad news, Eliza’s mind turns to other matters, including some that include her heart. In honor of Fourth of July week coming to a close here in the US, here’s a spoiler-free Q & A all about Alex and Eliza. 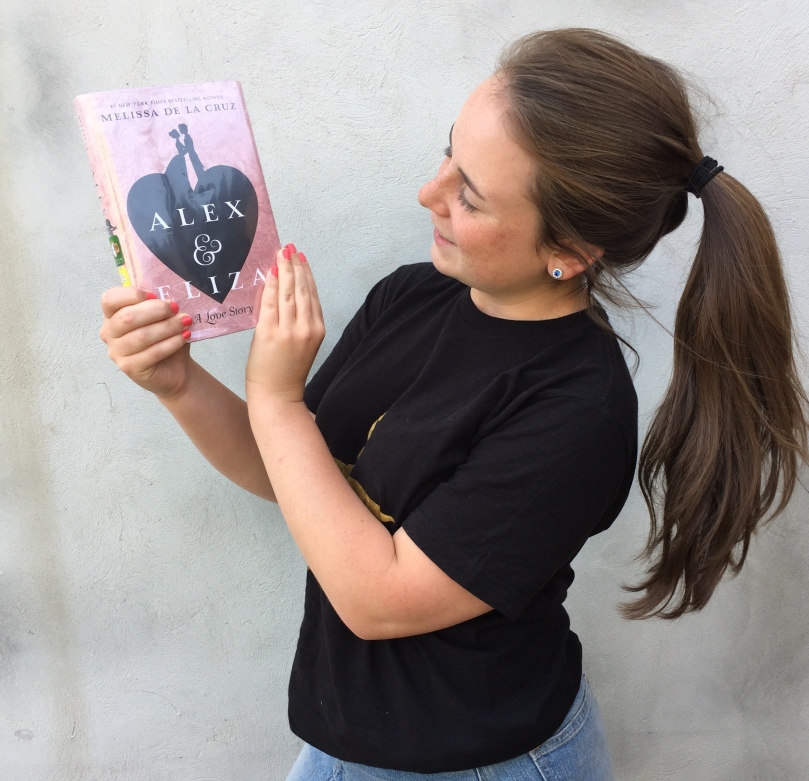 Q: If I enjoy Hamilton: An American Musical, how much will I like Alex and Eliza?

A: You will LOVE Alex and Eliza. If I had one “disappointment” about Hamilton, it’s that I wish we had more time with Eliza. Obviously, I understand that all of the major components of Alexander Hamilton’s life couldn’t be thoroughly expressed in the show (but if Lin Manuel-Miranda did that, I’d be all for it). Even though the novel isn’t 100% historically accurate (newsflash: Hamilton isn’t either), Alex and Eliza gives us a longer interpretation of how Alexander and Eliza met and everything leading up to their marriage. In addition, I feel that we get to see more of Eliza’s personality (and of course Angelica and Peggy are along for the ride too). I also admit to ignoring Melissa de la Cruz’s physical descriptions of Alex and Eliza and envisioning Lin as Alex and Phillipa as Eliza.

Q:How much is this like Hamilton: An American Musical?

A:While there’s no signing or dancing, we get to interact with a lot of the characters from the first act of Hamilton. Beside Alex and the Schuyler sisters, our favorite commander in chief and some of Alex’s friends (one may be French) make appearances in the novel.

Q: Alex and Eliza is a historical fiction read. What were some interesting aspects of the novel being set during the Revolutionary War?

A: Alex and Eliza takes place from 1778 to 1780. I found it really interesting reading about the characters’ wardrobes choices, from powdered wigs to larger than life ball gowns. Marriage often comes up in the novel as well, as the Schuyler sisters are forced to consider the size of their partners’ fortune. It was a reminder of how marriage was used back then to increase a family’s wealth and power.

A: Eliza! I enjoyed reading Alex’s parts, but I would have been satisfied (you know there had to be a pun somewhere) if the book solely centered on Eliza. I loved how she was different from her sisters and how she made it a priority to be involved in the war as much as possible. It was also funny to see her not be so impressed with Alex at first sight.

Q: Is there interaction with other characters outside Alex and Eliza?

A: Yes! My favorite side characters in the novel included Angelica, Peggy, and Aunt Gertrude. I loved getting more character development from Angelica and Peggy. Unlike Hamilton, Melissa de la Cruz doesn’t adopt the idea that Alex and Angelica at some point had feelings for each other. Instead, we see Angelica disapproving Eliza’s interest in the poor orphan. It’s Peggy, who has a close friendship with Alex, that cheers the couple on. My favorite side character had to be the Schuylers’ Aunt Gertrude, who was just so unconventional and was such a great role model for Eliza. I loved her humor!

Have you read Alex and Eliza? Share your thoughts and feels in the comments!